On 23 November, Chancellor of the Exchequer Philip Hammond pledged ‘Significant additional funding’ for transport networks in his Autumn Statement to Parliament.

On 23 November, Chancellor of the Exchequer Philip Hammond pledged ‘Significant additional funding’ for transport networks in his Autumn Statement to Parliament. 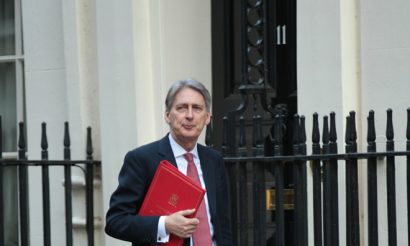 Delivering his first Autumn Statement as UK Chancellor, Philip Hammond announced a new National Productivity Investment Fund of £23 billion to be spent on innovation and infrastructure over the next five years. The fund will provide major additional spending in areas including transport, digital communications, research and development, and housing.

As part of this commitment, an additional £1.1 billion will be invested in English local transport networks. This will include £450 million to trial digital signalling on railways helping to increase reliability and “achieve a step-change in reliability. And squeeze more capacity out of our existing rail infrastructure”. Furthermore, £220 million will be spent to address traffic pinch points on strategic roads and a £390 million investment will go to future transport technology, including driverless cars, renewable fuels and energy efficient transport. This will include:

Also confirmed is £110m for East West Rail – a strategic railway connecting East Anglia with Central, Southern and Western England – and a commitment to deliver the Oxford to Cambridge Expressway

Furthermore, the Chancellor confirmed the Department for Transport will continue to work with Transport for the North to develop detailed options for Northern Powerhouse Rail and announced a Northern Powerhouse Strategy which recognises the role of transport connectivity in boosting economic growth in the North.

Reacting to the announcement, John Cridland, Chair of Transport for the North and former Director-General of the CBI, said, “We know the North currently lags behind the rest of England in terms of productivity but has huge potential. The new Northern Powerhouse Strategy highlights evidence from our Northern Powerhouse Independent Economic Review, published earlier this year, which identified that with the right investment in infrastructure and skills development, by 2050 the North’s economy would be worth £97 billion more than if it carried on developing at the current rate. That’s a huge prize, not just for the North but for the whole of the United Kingdom, and we are pleased that the government has recognised its importance.”

“It is therefore vital that investment in transport innovation tackles not only the specific issues of today, but also fundamentally how and why people will travel in the future”

Commenting to the Chancellor’s Autumn Statement, James Stamp, head of transport at KPMG UK said: “Today the Chancellor announced funding for more road and rail capacity. Specific improvements, such as alleviating road network pinch-points, and the Midlands Rail Hub, are welcome, as is the positive sentiment about Crossrail 2.

“However, even with investment in specific schemes, a stark fact remains: demand for transportation will always be ahead of our ability to pour more concrete. Making more from the capacity we have is – and will stay – key. Without this, congestion will remain a limiting factor on productivity.

“It is therefore vital that investment in transport innovation tackles not only the specific issues of today, but also fundamentally how and why people will travel in the future. Smart ticketing, autonomous vehicles, and smart infrastructure all individually promise incremental benefits, and investment in this area is therefore encouraging. But the exponential change that could be unleashed by combining these initiatives (along with better use of data for providing information and choice to passengers) together is the real prize. Translating the potential of Mobility-as-a-Service, enabled by digital technology, to reality will require collaboration between policy makers, private operators, and transport authorities. It must be a key aim for the Government.”

“We are already making real strides in developing smarter cities which will open up transportation, delivering safer, more secure and reliable journeys for travellers. There are no easy answers but additional investment in the most impactful areas would be a major step in the right direction in providing transport solutions which will help relieve pressure created by population growth and traffic increases.

“We also need additional investment if we are to significantly move towards better transport links between the Northern Powerhouse, the Midlands Engine and the South East. This will create greater economic growth for the UK and provide businesses with the vital skills they need to build these economic hubs.”