The Wright Group celebrated a triple milestone last week when the first ever Wrightbus Double Deck bus officially entered service in Singapore (Thursday 16th September). The event also marked the successful completion of the first locally-produced vehicle, as well as confirmation of a further order for 300 Double Deck buses from SBS Transit of Singapore. 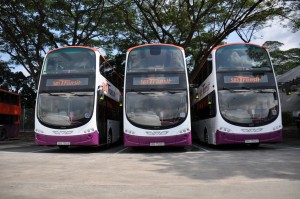 Last August saw the announcement of an initial export order, won in tandem with Volvo Bus Corporation, for the Wright Group to supply the bodywork for 150 new Double Deck buses in kit form to SBS Transit. One year on, the initial prototype vehicle is entering service and local production is operational, with the first Double Deck bus rolling off the production line at the C.D.G.E. facility in Singapore.

Such has been the success of the venture, that a further 300 vehicles have been ordered, which will mean that a total of 450 Wrightbus bodied Double Deck buses will be in service with SBS Transit by 2012. “This is a hugely significant milestone for the Wright Group here in Singapore, in what has been a major project for the company, both in terms of scope and scale,” said Wright Group Business Development Director Jonathan Poynton.

As well as the design, and build in Northern Ireland of an initial prototype vehicle to provide a benchmark for local production, the project has also drawn upon our production management and logistics capabilities to produce and package completely knocked down (CKD) kits in Ballymena, which are then shipped across the globe, with local assembly workers trained to Wright Group quality standards by staff seconded from Ballymena.”