Rio de Janeiro has celebrated the opening of its first integrated tramway system two months ahead of the city hosting the Olympic Games. 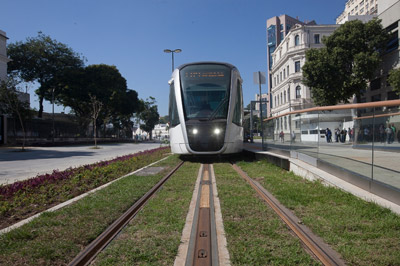 Rio de Janeiro has celebrated the opening of its first integrated tramway system two months ahead of the city hosting the Olympic Games.

Concession company VLT Carioca together with Alstom, have marked the start of operations on Rio’s first new light-rail vehicle (LRV) line. The inauguration took place on Sunday 05 June in the presence of Eduardo Paes, Mayor of Rio de Janeiro and Michel Boccaccio, Senior Vice President of Alstom in Latin America.

The Rio tramway network was constructed by VLT Carioca – a concession company formed of CCR, OTP, INVEPAR, RIOPAR, BRT and RATP Développement. Once fully open, the network will consists of three lines covering more than 28 kilometres and 31 stations. The first phase which opened on the 05 June covers a distance of 7 kilometres connecting Santos Dumont to Parada dos Museus (Praça Maua) calling at eight stops. A further 7km will open before the start of the Olympic Games. The tramway was created with intermodality in mind, helping to improve traffic in downtown Rio. 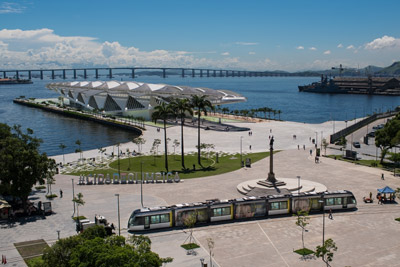 In September 2013, Alstom was awarded a contract by VLT Carioca consortium to provide 32 Citadis trams, electrification, signalling, telecommunications and depot equipment. In order to maintain Rio’s architecture, VLT Carioca opted for a catenary-free power solution combining APS, which supplies power via a third rail on the ground and Supercapacitors, modules installed on the roof of the tram which store and regenerate energy. 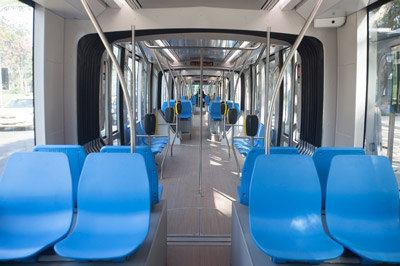 Citadis tram will carry up to 420 passengers at a time

Made up of seven cars, the 44 metre-long Citadis tram is able to carry up to 420 passengers at a time and up to 200,000 passengers per day. The first five trams were designed and made in La Rochelle in France while the 27 others are being manufactured in Taubaté, the first tram factory in Brazil.