The number of passengers using Edinburgh Trams has increased 9.3 percent according to the latest figures published by Transport for Edinburgh. 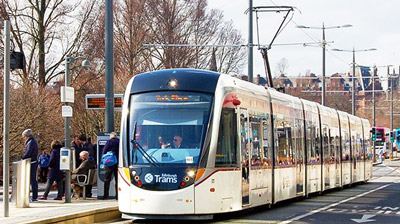 The number of passengers using Edinburgh Trams has increased 9.3 percent according to the latest figures published by Transport for Edinburgh.

Today’s published data shows there were 5.38 million passengers on the network in its second 12 months of operation. This equates to a 9.3 percent increase on the year following launch, when 4.92 passengers were carried, and around 340,000 ahead of the target for the period.

Lea Harrison, General Manager of Edinburgh Trams, said: “The trams are a convenient, comfortable and cost-effective way of travelling through the city and we’re delighted to see this reflected in our passenger figures. We’ll continue to work hard at providing the best possible service and to introduce further improvements to encourage even more travellers to hop on board.”

George Lowder, Chief Executive of Transport for Edinburgh, said: “These results are hugely encouraging. I am extremely grateful to all the staff at Edinburgh Trams for their dedication and hard work that provides such an excellent service as recorded in the 2015 Passenger Focus Survey and by TripAdvisor. We are concentrating this year on enhancement of the existing service and are certainly not going to be complacent.”

Councillor Lesley Hinds, Chair of Transport for Edinburgh, added: “There is no doubt Edinburgh Trams is going from strength to strength, as these latest passenger figures show, alongside consistently high customer satisfaction ratings. This is thanks to a great team of staff, who over the last two years have helped make Edinburgh Trams the service it is today, and I look forward to continuing our journey as it develops and expands.”

The trams network currently has a fleet of 27 which travel on the 14km route calling at 15 stops (16 once the Edinburgh Gateway is complete). A journey from Edinburgh Airport to the city centre takes approximately 35 minutes.