Ahead of the final phase of work, Transport for Greater Manchester (TfGM) has launched a multi-media campaign to prepare passengers for the opening of St Peter’s Square Metrolink stop this summer. 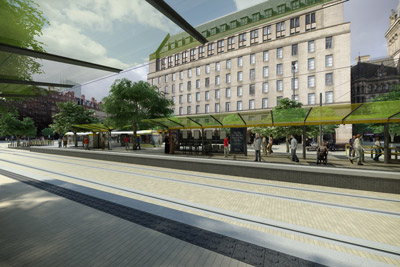 Ahead of the final phase of work, Transport for Greater Manchester (TfGM) has launched a multi-media campaign to prepare passengers for the opening of St Peter’s Square Metrolink stop this summer.

A new, much larger St Peter’s Square is currently under construction in the centre of Manchester. Once complete it will be a key destination on the new Metrolink Second City Crossing

This summer sees the end of the 14-month construction project to build an expanded stop that is ready for more trams running through the city, more often.

As the work involved will take place close to the track, Metrolink services through the square will be suspended from Sunday 26 June to the end of August, meaning no north/south cross-city tram services will operate.

During the same period Metrolink operator MRDL will replace sections of track on the Eccles line, which is now 16 years old. 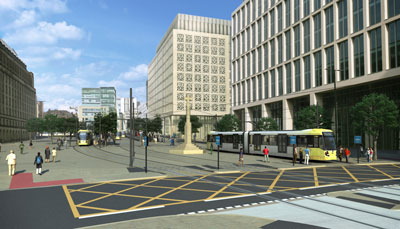 In order to complete the work as efficiently as possible, the line will also close from Sunday 26 June. Tram services are expected to resume between Deansgate-Castlefield and MediaCityUK in early August, with the full line reopening at the end of August.

“ This is an exciting time for Metrolink ” 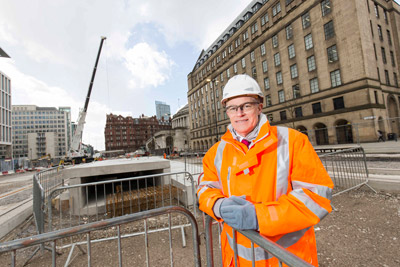 Peter Cushing, TfGM Metrolink Director, said: “This is an exciting time for Metrolink with some historic changes on the way for St Peter’s Square. We’re just months away from opening up a new, much bigger stop that will be a game-changer for city centre services when the new Second City Crossing opens early next year.

“We can’t complete the stop without full access to the work site and, as we set out last year, that means no tram services through the square for approximately nine weeks.

“Last summer we made similar changes to services so we’re confident we’ll provide the right mix of replacement bus services and information to support our customers through this time.

“Thanks once again to all our passengers for bearing with us as we work to improve the service we provide. I’m sure they’ll be impressed with the results at St Peter’s Square.”

The stop will have two new island style platforms and two sets of track in each direction, allowing more services to run through it on the existing lines and the new Second City Crossing.