Lucknow Metro Rail Corporation (LMRC) and Alstom have unveiled designs of the new Metropolis for the city of Lucknow in the state of Uttar Pradesh, India. 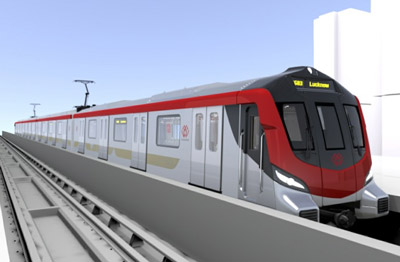 Lucknow Metro Rail Corporation (LMRC) and Alstom have unveiled designs of the new Metropolis for the city of Lucknow in the state of Uttar Pradesh, India.

According to LMRC, the design of Lucknow Metro train is a tribute to the city’s cultural richness. The front of the metro has been conceived in the spirit of some of the city’s most important monuments’ such as Bara-Imambara, the Asifi Masjid and the Roomi Gate. Its exterior livery in golden colour is inspired by the traditional Chikankari craftsmanship treated in a modern and structured manner. Similarly, blending of black colour in front of car is inspired from modern feel of Hazratganj. A red ribbon profile taking off from train front and moving to side to side top of complete train gives speed and dynamic feeling to the train.

The Lucknow Metropolis will offer 186 seats in longitudinal configuration and two dedicated zones for passengers with reduced mobility. Screens will be placed at convenient locations throughout the metro displaying up-to-date travel information. 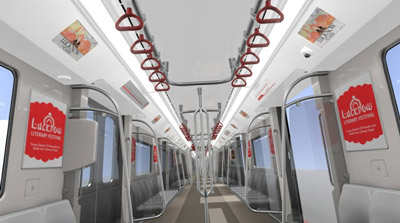 In addition, passenger safety features will include emergency communication, including talkback facility to the train operator directly and CCTV transmitting images to a centralised security control room.

In September 2015, Alstom was awarded a contract by LRMC to supply 20 Metropolis trainsets, each composed of four metro cars carrying approximately 1100 passengers at a time. The Metropolis trainsets will circulate on the city’s new metro line, which will be around 23 km long and will include 22 stations, of which 19 will be elevated and 3 underground. The line is estimated to carry about 430,000 passengers per day at first, increasing to over 1 million by 2030.

The new metros have been designed to be energy efficient, reliable and provide better comfort to passengers in terms of riding quality, lower–noise level and environment friendly. Each vehicle will feature LED lighting and regenerative braking in order to conserve energy. The train will be monitored & selectively controlled by a microprocessor based Train Control & Management System (TCMS).

The metro cars will be produced at Alstom’s Sri City and Coimbatore manufacturing facilities in India. The signalling system will be jointly supplied by Alstom’s sites in Bangalore, India and Saint-Ouen, France.