Posted: 4 May 2016 | Mandy Parrett, Editorial Assistant | No comments yet

The Buenos Aires metro authority, SBASE, has awarded Alstom a contract worth approximately €60 million to provide 60 Metropolis cars for line D of the metro network. 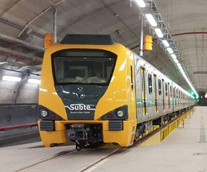 The Buenos Aires metro authority, SBASE, has awarded Alstom a contract worth approximately €60 million to provide 60 Metropolis cars for line D of the metro network.

The new trains – to include all modern conveniences – are expected to be delivered in 2017 and form a significant part of SBASE’s 2016 subways improvement plan that will rejuvenate the entire metro system of Buenos Aires.

As part of a metro network with six lines that span nearly 60 kilometers, line D is over 10 km-long and includes 16 stations. With the investment in these new trains SBASE (Subterráneos de Buenos Aires) will be able to offer additional comfort to the nearly 360,000 passengers that commute daily on the line.

Each Metropolis trainset is composed of six cars that can accommodate up to 1,500 passengers. In order to facilitate passenger flow, the new metro trains will feature four automatic doors each side as well as large gangways. To enhance passenger experience the metro is equipped with a digital line-map display, LCD screens for video broadcasts, CCTV and air conditioning.

As part of the contract, Alstom will also supervise the maintenance of the Metropolis trainsets during their first two years of operation.

“We are pleased to be awarded this new contract which reinforces our presence in Argentina. It is an excellent endorsement of our strong relationship with SBASE who has already ordered more than 200 Metropolis cars from us, as well as signaling and services.” says Michel Boccaccio, Senior Vice President of Alstom in Latin America.

“With the new Metropolis, commuters will certainly enjoy travelling aboard a train that is sustainable, comfortable and reliable”.

The Metropolis trainsets will be produced at Alstom’s Lapa plant, in São Paulo state, in Brazil.