Public transport operator FirstGroup has revealed it has ordered 305 new buses in contacts worth a total of £70 million. 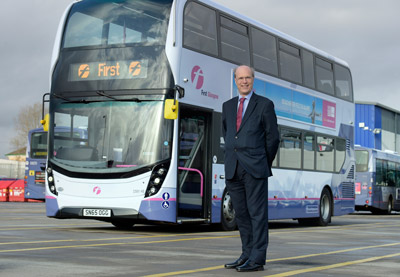 Public transport operator FirstGroup has revealed it has ordered 305 new buses in contacts worth a total of £70 million.

FirstGroup has ordered a further 305 new buses for operation across the UK, adding to the 2,500 new vehicles purchased over the past six years at a cost of £455 million.

FirstGroup has confirmed 98 percent of the order will be manufactured in the UK. Scottish firm Alexander Dennis Limited (ADL) will manufacture 204 vehicles, while Northern Ireland’s Wrightbus has secured an order for 91 buses, and Volvo has won a contract to build 10 coach chassis in Sweden, with the bodies manufactured by ADL. 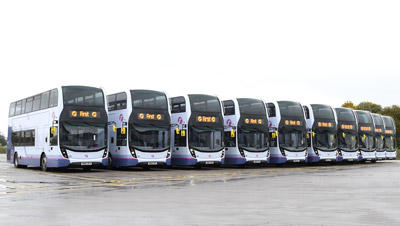 All 305 new buses will be fitted with the latest Euro VI engines, which produce 95% fewer oxides of nitrogen (NOx) emissions compared to buses with Euro V engines and as a result will help improve air quality in the towns and cities in which First Bus operates.

All new vehicles fitted with free on board Wi-Fi

FirstGroup has announced that all the new buses will feature on board Wi-Fi providing passengers with free internet access. In addition, the operator reveals by the end of the financial year around 60 percent of the 6,300 First Bus fleet will also be Wi-Fi enabled. Most passengers will benefit from leather seats, while some of the new vehicles will be fitted with next stop audio-visual display screens and around 30 percent with USB charging points, allowing customers to charge their phones and tablets while on the move.

“We are determined to make the bus a more compelling proposition, attract more customers and grow our business”

Giles Fearnley, Managing Director of First Bus, said the order, which comprises 204 double deckers, will help encourage more customers across the UK to use the bus: “This is great news for First Bus customers.  We are determined to make the bus a more compelling proposition, attract more customers and grow our business.  Ensuring that our customers travel in modern, comfortable, fit for purpose vehicles which provide added value such as free Wi-Fi and USB charging, is pivotal to our customer engagement strategy and our future success.”

He continued: “In 2015, we announced the largest order on record in the UK for vehicles with Euro VI engines, complementing efforts from our partners in local councils to improve air quality in our towns and cities.  Our 2016 order again reflects our commitment to working with our partners to reduce emissions and improve the environment.”

“First Bus is proud to continue supporting British bus manufacturers,” he added.  “Our manufacturing partners continue to lead the world in quality, innovation, fuel efficiency and value for money.  I’m pleased that we’ve again invested heavily in our fleet and our tradition of supporting the British manufacturing industry remains strong.”

Commenting on the order, Ian Downie, Managing Director – Sales & Customcare for Wrightbus, said:  “We are delighted to have received this significant order from one of our longest standing customers. When delivered, there will in total be more than 670 StreetLites and 136 StreetDecks – which were launched in 2015 – in operation with First Bus.

“Wrightbus is proud of its long-term relationship with First Bus and looks forward to delivering this latest fleet of new buses into service.”

FirstGroup has also announced 14 new buses will enter service in Doncaster this month (April) marking the start of the ‘Doncaster Bus Partnership’ in May.  The successful Sheffield Bus Partnership will benefit from a further 10 new vehicles. The strong developing partnership in Cornwall will see First Bus invest £7.1m in 30 new vehicles.  Meanwhile thanks to high profile partnerships in the West of England, particularly Bristol, 68 new vehicles worth £18.1m are earmarked for its operations.