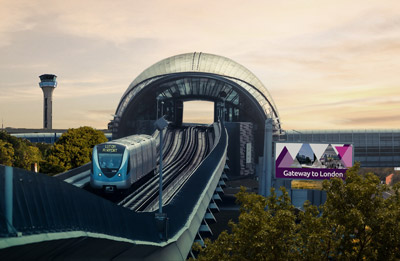 Plans for a £200 million mass passenger transit (MPT) system have been revealed by, London Luton Airport Ltd (LLAL). The new rail line will provide a link between the airport and Luton Airport Parkway railway station.

The rail link forms part of Luton’s wide-ranging £1.5 billion inward investment programme which outlines a 20-year plan for major transformation of the town and highlights how the borough will achieve strong, sustainable and balanced growth and create jobs for local people.

In addition, the airport is currently going through a £110 million redevelopment. It is hoped the combined investment will transform the passenger experience and enable Luton Airport to increase its capacity by 50 percent to 18 million passengers per year by 2020.

The MPT system will be a fully-automated, two-way, 24-hour, guided light rail people mover covering a distance of 2.2km. Once complete, the rail link will provide a direct journey between London St Pancras and the airport within 30 minutes.

LLAL has appointed Arup to design and procure the scheme. It is anticipated that a planning application will be made in the early autumn with work beginning in 2017. The system will become operational by the end of 2020.

It is envisaged that fares would be included under train ticket or car parking arrangements, or available for separate purchase, as with the current bus service.

Cllr Andy Malcolm, Chair of LLAL, said: “I am delighted to confirm that the board has committed to start the procurement process to provide fast, easy access between Luton Airport Parkway and the airport terminal.

“Luton is the fastest growing airport in the UK and enjoys excellent road links to London and the North while Luton Airport Parkway also gives excellent rail connectivity to the capital and the Midlands.

“The scheme we are announcing today will provide a seamless five-minute transfer time between Parkway station and the airport terminal.

“A total journey time of less than 30 minutes from St Pancras to the airport will beat the time from Liverpool Street to Stansted by 20 minutes and better the time from Victoria to Gatwick too.”

Cllr Malcolm added: “LLAL is committed not only to optimising the airport’s capacity to 18 million passengers per year but also to the development of the town as a whole.

“With a  catchment area of 23 million people within a two-hour travel time, London Luton Airport is ready and willing to make a significant contribution to meeting the growing demand for air travel in London and the South-East.

“Combined with the prospect of four fast trains an hour which we are lobbying for, this investment in mass passenger transit will transform the experience of those travelling to the airport by rail, and will encourage more people to do so and therefore help to reduce congestion on the roads.

“A step towards creating a world-class air-rail service”

Nick Barton, CEO of LLA, said: “Improving rail links is a crucial part of LLA’s development, and integral to ensure that we provide the best possible service for all our passengers.

“The creation of a mass passenger transmit link between Parkway station and the terminal is a milestone in the airport’s transformation and the first step towards creating a world-class air-rail service.”