A National Assembly committee looking at bus and community transport across Wales has recommended a country-wide smart-ticketing system by 2018. 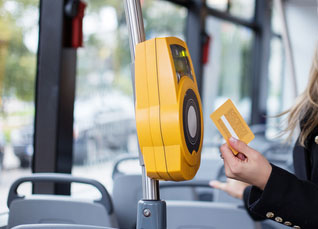 A National Assembly committee looking at bus and community transport across Wales has recommended a country-wide smart ticketing system by 2018.

The Enterprise and Business Committee has put forward recommendations to the National Assembly for Wales for a Wales-wide smart-ticketing system, similar to that in place in London, a traffic commissioner for Wales, and a new strategy for Community Transport. It believes the measures are needed to develop public transport services particularly in rural areas.

The Committee report, which looked at bus and community transport across Wales, found that falling subsidies, falling passenger numbers and reductions in bus services across Wales are having a severe impact, particularly in rural areas. The Committee highlighted its concern that people, particularly the most vulnerable, can be left feeling isolated.

The Committee was told of bus initiatives in areas including Essex, Cornwall, Nottingham and the North East which could offer valuable lessons for Wales.

“Buses are the most widely used form of public transport in Wales, yet the industry is facing an uncertain future,”

‘Community Transport has a powerful role to play’, concluded the Committee, ‘but those planning transport networks need greater clarity about what that role should be. There is also a need to ensure the regulations are enabling it to deliver, and reimbursement rates allow it to run without making a loss.’

“Buses are the most widely used form of public transport in Wales, yet the industry is facing an uncertain future,” said William Graham AM, Chair of the Enterprise and Business Committee.

“There are a range of policy issues which undermine the Welsh bus industry. The need for a dedicated Wales-only Traffic Commissioner based in Wales and accountable to the Welsh Government and National Assembly is widely acknowledged, but not delivered. Planned devolution of bus registration powers cannot come quickly enough.”

“We need ambition – which is why we recommend setting a 2018 deadline for a Wales-wide integrated ticket system, of the kind that is already available in London where the use of contactless payment through bank cards and smartphones is commonplace. It is technologically possible and passengers want it. The incoming transport minister will need to drive this initiative from day one.”

The Committee makes 12 recommendations in its report, including: