Mayor of London Boris Johnson MP has confirmed a £60 million deal for delivery of almost 200 additional Wightbus Routemaster buses for the capital. 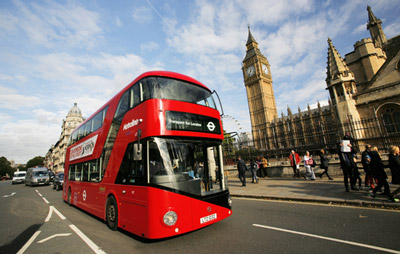 Mayor of London Boris Johnson MP has confirmed a £60 million deal for delivery of almost 200 additional Wightbus Routemaster buses for the capital.

Northern Ireland based manufacturer Wrightbus will deliver 195 Routemaster buses for London in an agreement worth approximately £60 million. The deal with Wrightbus will safeguard 300 manufacturing jobs, as well as support a supply chain of companies across the United Kingdom.

The Mayor of London confirmed the order whilst visiting the Wrightbus chassis plant that was created as a direct result of orders for London’s New Routemaster bus. The Mayor toured the factory floor and greeted the team building the iconic red buses.

Mayor of London, Boris Johnson MP, said: “I am absolutely delighted to be able to confirm a further order for these superb buses. They are a masterpiece of British engineering and design, and they prove that we are capable of building a bus in the UK with cutting edge technology that simultaneously delivers jobs and growth around the country.”

Secretary of State for Northern Ireland, the Rt Hon Theresa Villiers MP said: “This is brilliant news for Ballymena-based Wrightbus and all the Northern Ireland firms in the supply chain who stand to gain from this significant investment by TfL.

“I have been deeply committed over recent months to helping get this over the line for Northern Ireland so I am particularly pleased with this deal. These iconic buses represent a powerful link between Northern Ireland and Greater London, as well as with all the other UK firms whose expertise contributes to the outstanding qualities of this world class vehicle.”

The buses have two staircases and three sets of doors allowing large numbers of passengers to board and alight and will be supplied with opening windows on the upper and lower decks following feedback from passengers.

New Routemaster order will increase hybrid buses in the capital to 1,900

The buses boast the latest Euro 6 engines and will increase the number of hybrid buses in the Capital to 1,900 – representing 20 percent of the overall fleet – when they enter service in summer 2017. Today’s order was made at a reduced rate of £319,000 per bus, which is comparable to the cost of a standard hybrid bus.

As well as the manufacture of New Routemaster chassis and superstructures in Northern Ireland, a number of components for New Routemaster buses are made by companies from around the UK; including engines from Darlington, seats from Telford, seat moquettes from Huddersfield, wheelchair ramps from Hoddesdon and flooring from Liskeard.

London’s Transport Commissioner, Mike Brown MVO, said: “Northern Ireland is a vital link in the supply chain for TfL, and today’s visit demonstrates that investing in transport infrastructure in London means investing outside it too, creating and safeguarding jobs across the country.”

Mark Nodder OBE, Chairman and CEO of Wrights Group, said: “We are delighted to receive this contract extension for a further 195 New Routemasters from TfL.  This will secure employment of around 300 of our workers for a further 12 months, and will benefit our extensive supply chain both in Northern Ireland and throughout the rest of the UK.  For us the New Routemaster has combined innovation and cutting edge technology in a way which showcases the best of British manufacturing excellence.

Delivery of the additional vehicles is scheduled for summer 2017 bringing the total new Routemasters ordered to 1,000.