Birmingham will become the first city in UK to use the latest battery technology to enable Midland Metro catenary-free operation. Centro’s fleet of Midland Metro Urbos 3 trams are to be fitted with hi-tech batteries to power the vehicles through architecturally sensitive areas. The proposal was given the go-ahead by West Midlands Integrated Transport Authority […] 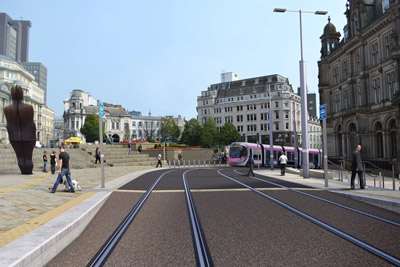 Birmingham will become the first city in UK to use the latest battery technology to enable Midland Metro catenary-free operation.

Centro’s fleet of Midland Metro Urbos 3 trams are to be fitted with hi-tech batteries to power the vehicles through architecturally sensitive areas. The proposal was given the go-ahead by West Midlands Integrated Transport Authority (ITA).

Approval of the scheme means there will be no need for overhead cables around the 182-year-old Town Hall in Victoria Square when the city centre Metro line is extended through from New Street station to Centenary Square.

Cllr John McNicholas, chairman of the ITA’s delivery committee, said: “When we placed the order in 2012 for our new fleet of trams the ITA had the vision for them being capable of running without overhead wires.

“The technology then was not sufficiently developed to incorporate into the Birmingham city centre extension, but provision was made within the contract that should technology catch up the new trams could be retro-fitted with batteries.

“That is now the case and the application of battery technology on this scale in the West Midlands will be a historic first for the UK light rail industry and the modern era of British tramways.”

The current 21 tram fleet was made in Spain by CAF.

Urbos 3 trams already run catenary-free in sections of the tram networks in Zaragoza, Seville and Cadiz in Spain but use supercapacitors to provide on-board energy storage.

However these would be unsuitable for trams negotiating the steep hill in Pinfold Street from New Street station into Victoria Square.

Overhead lines and equipment would have been needed, marring the architecturally sensitive environment of Victoria Square.

However CAF now says newly available lithium ion batteries are robust enough to handle the gradients and can be fitted so trams are ready to run when the extension to Centenary Square opens in 2019.

The batteries will be fitted on the tram roof and will be recharged by the overhead lines along other parts of the route.

They are expected to require replacement at approximately seven-year intervals.

Four new trams to allow the fleet to keep the current level of service once the Centenary Square extension opens have already been ordered and will come with batteries fitted.

There are four sections identified in future network extensions for catenary-free running:

Negotiations have begun with battery suppliers but the final cost is not yet available.

However a £3.15m contribution will be made by the Greater Birmingham and Solihull Local Enterprise Partnership and £1m will come from industry association UKTram.