Bus route 68 is the latest on the Transport for London (TfL) bus network to be served by New Routemaster buses.. 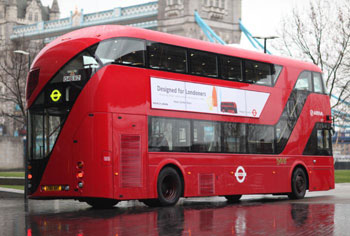 Bus route 68 is the latest on the Transport for London (TfL) bus network to be served by New Routemaster buses.

There will be a phased conversion of the route which is run by Go Ahead. It runs to West Norwood via Euston, Russell Square, Holborn, Aldwych, Waterloo, Elephant & Castle, Camberwell, Herne Hill and Tulse Hill. The service will be running entirely with New Routemaster buses by the end of April 2016.

Mike Weston, TfL’s Director of Buses, said: “We are pleased to be able to bring the benefits of New Routemaster buses to more of our customers. These green buses will make a significant contribution to improving air quality in London by replacing older, more polluting vehicles in the fleet. By end of July, more than 800 will be in passenger service.”

During peak hours, 25 of these state-of-the-art buses will be in passenger service to carry the 20,000 people who travel on the route each week day. Night services on bus route N68 will continue to be operated with conventional double-deck buses.

Route 68 will operate with the rear platform closed when the bus is moving, with large numbers of passengers able to quickly board and alight using all three sets of doors and two staircases at bus stops.

To date, 19 bus routes in London are operating with New Routemasters. The conversion of route 68 will be another step towards the delivery of over 800 New Routemasters on London’s streets by the end of July, reducing CO2 emissions in the Capital by around 27,500 tonnes a year.

The introduction of New Routemaster buses is part of a comprehensive programme to reduce emissions from London’s bus fleet, which includes 1,700 hybrids on the streets by the end of March 2016, introducing ultra-low emission Euro VI buses and retrofitting 2,000 older buses to reduce their NOx emissions by up to 88%.