Transport for London (TfL) has confirmed more than 100 bus priority schemes will be in place in the capital by April 2016 thanks to a £200 million investment. With a rise in congestion due to a construction boom and a significant growth in population TfL has invested £200m in 116 bus priority schemes across the […] 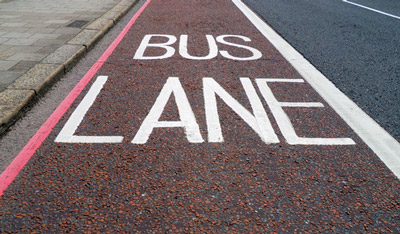 Transport for London (TfL) has confirmed more than 100 bus priority schemes will be in place in the capital by April 2016 thanks to a £200 million investment.

With a rise in congestion due to a construction boom and a significant growth in population TfL has invested £200m in 116 bus priority schemes across the capital helping thousands of passengers get through busy parts of the London more quickly.

The programme is designed to help buses get through congested areas quicker and more reliably. The new bus priority schemes include changes to road layouts and junctions, and enabling small changes to routes so that buses can avoid traffic hotspots.

As an example, the most recently completed scheme, in Battersea, allows route 156 buses to make a right turn from northbound on Queenstown Road to eastbound on Battersea Park Road.  It will reduce average journey times by around a minute and a half in each direction in the morning and evening peaks, benefitting approximately 800,000 passengers a year.

Around 50 bus priority schemes were delivered across the Capital in partnership with local boroughs during 2015 and a total of 116 will be in place by the end of April 2016.  Passengers will see improvements take place in 17 London boroughs right across the Capital.  Bus Priority Schemes to be completed this year include:

Mike Weston, TfL’s Director of Buses, said: “London’s continued success means that it is a very busy city with a huge range of construction projects underway, particularly in central London, and this is having an effect on traffic.  To ensure that the bus network remains reliable and efficient, we are investing £200 million in modernising roads across the Capital so that bus passengers can avoid potential delays to their journeys.  Fifty schemes were completed last year and there are dozens more that will be completed over the next few months, ensuring that bus journeys are as quick and easy as possible.

“We’re working 24-hours a day to relieve congestion through our Traffic Control Centre and cracking down on illegal or inconsiderate drivers through our expanded team of dedicated traffic enforcement officers.”