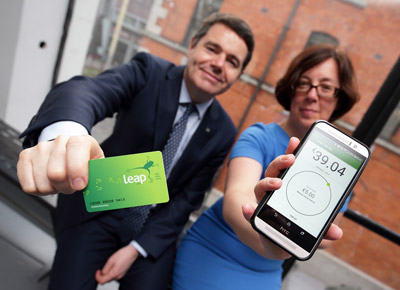 Minister for Transport, Tourism and Sport, Paschal Donohoe T.D has launched a new Leap Card app for customers with NFC enabled Android phones. From 25 January 2016, passengers will be able to check their card balance and instantly top-up their card with travel credit or collect pre-purchased tickets, including TaxSaver tickets, all by touching their card against their phones. In addition, people with the App on their phones can check a friend’s Leap Card Balance for them, allow them to collect a ticket or pay for a friend’s Leap Card top-up, instantly.

Launching the app, Paschal Donohoe TD, Minister for Transport, Tourism and Sport, said: “This new development further enhances the attractiveness of the Leap Card for users. Leap customers are already making significant savings of 20% on travel costs and are spared the hassle of having to make sure they have the right change before setting off. The NTA is to be commended for the forward thinking they have shown in respect of how to further improve Leap services. By listening to their customers and identifying an area that could make using Leap Cards even easier they set about addressing customers’ needs through advances in digital technology. Earlier this month, the NTA outlined an increase in public transport passenger numbers of 3.5% for 2015. Continuing to make public transport cheaper and easier to use is bound to see those results replicated across 2016. This development for Leap customers is another step in that direction’.

“We are delighted to launch this fantastic new App today”

Anne Graham, CEO of the National Transport Authority, added: “We are delighted to launch this fantastic new App today.  Leap Card has huge public support – more than 1.5 million cards have been sold since its launch four years ago; it delivers 20% transport cost savings to card-holders, and gives great discounts to people transferring to another bus, Luas or rail service to complete their journey.

“We have been listening to customer feedback, and our bus customers in particular were telling us that they would welcome a more convenient top-up process.  Train, DART and Luas users’ cards automatically update following an online top-up or ticket purchase when the card is touched-on to a gate or terminal at the start of a journey, but the bus user has to go to a shop or a dedicated terminal, not always on their way, to load-up the credit they’d bought online or to collect their TaxSaver ticket.  Today’s new App means that people can make those top-up or ticket collections, using credit or debit cards, while they are on their way from A to B, or in the comfort of their own homes at night – whenever suits them – and start using them straightaway.

“This is a new technology in Ireland; in fact we’re one of the first travel smartcards in the world to develop an App using NFC technology for reading card balances and for topping up.  We have been actively trialling the App for a number of months now, and the early-user feedback has been very positive. “

Apple has not yet decided to allow access to NFC technology by third parties.  If and when they do, the National Transport Authority plans to develop this App on iOS for iPhone owners.

Meeting the transport needs of today’s passengers: How ABT can help