The Metropolis Nice Côte d’Azur tenders committee has awarded Alstom the contract to supply 19 Light Rail Vehicles (LRVs) for the new East-West Nice Côte d’Azur tramway. The tramway call for tender was launched in November 2014 for the supply of 19 tramsets, each being 44 metres long, energy charging equipment and purchase options for 18 […] 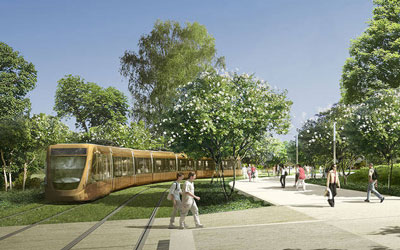 The tramway call for tender was launched in November 2014 for the supply of 19 tramsets, each being 44 metres long, energy charging equipment and purchase options for 18 extra tramsets to cover the needs of the East-West tramway line, as well as the extension of the line into the Plaine du Var region.

The signed contract worth €91 million includes the supply of 19 Citadis X05 tramsets and a ground-based static charging solution. The order includes options for 3 to 18 supplementary trams, their energy charging systems and maintenance for a period of 12 years. Alstom’s Citadis X05 trams will circulate on the new lines 2 and 3 of the Metropolis Nice Côte D’Azur network.

Unlike the network’s line 1, which Alstom equipped in 2007, the new tramway is absent from catenary over the entire surface section of the route. Instead trams receive regular charging via Alstom’s new ground-based static charging solution SRS, which allows the tram to charge safely and automatically in under 20 seconds while stopped inside the station. This decision was made in order to integrate the new tramway line into the urban environment while preserving the city’s architectural heritage.

Once complete the new 11.3 kilometre East-West Nice Côte d’Azur tramway will link Port de Nice and the airport in just 26 minutes. The project aims to improve transport links in the Nice Côte d’Azur metropolitan basin as part of a long term vision for a 2030 urban transport network. The programme aims to pool together all methods of transport via multimodal exchange hubs. 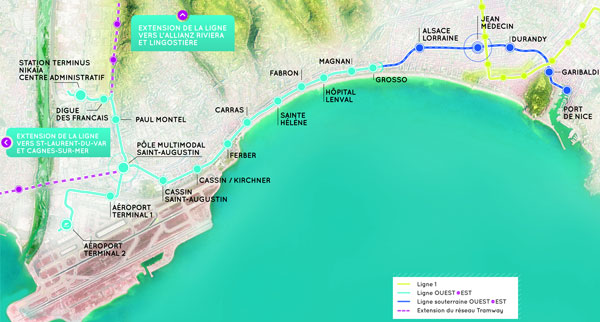 Christian Estrosi, Deputy-Mayor of Nice and President of the Metropolis Nice Côte d’Azur, said: “As a fervent advocate of French industry, I am particularly pleased that a French company has been selected for this contract, for which the call to tender was launched in November 2014. Renowned for the quality of its projects and its capacity for innovation, Alstom was able to propose competitive solutions adapted to our requirements, of which the first was the absence of an overhead catenary over the entire surface section of the line, allowing our tram to blend into its environment without disruption. In the coming months, I will be launching a public consultation to make the final decision regarding the design of the trams, which will circulate from west to east, then on Line 3.”

Jacques Beltran, Vice-President Sales and Marketing of Alstom Transport France, added: “This project will be a true technological showcase and we are proud that the Metropolis Nice Côte d’Azur has renewed its confidence in Alstom. We have presented our latest solutions, based on proven systems, to ensure that lines 2 and 3 reflect the ambitions of the region: innovative, unique, in harmony with their environment and a reference in terms of sustainable mobility. With over 2000 Citadis sold worldwide, and catenaryless tramway solutions that have covered over 20 million kilometres, we are offering solid guarantees of reliability and sustainability to the region.”

Further information regarding the Nice Côte d’Azur tramway can be found here.