The Mayor and London Underground revealed stunning new designs for the ‘New Tube for London’ – the next generation of Underground trains, which will come in to service from the mid-2020s… 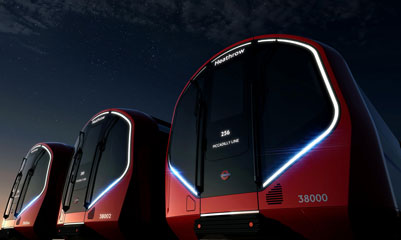 “These innovative, eye-catching and sleek new trains will be vital for the continued modernisation of London Underground." Image copyright:TfL

The Mayor and London Underground (LU) today revealed stunning new designs for the ‘New Tube for London’ – the next generation of Underground trains, which will come in to service from the mid-2020s.

The New Tube will be introduced first on the Piccadilly line, followed by the Bakerloo, Central and Waterloo & City lines. Its innovative design will also allow for air-cooling for the first time on deep-level sections of the Tube.

“These innovative, eye-catching and sleek new trains will be vital for the continued modernisation of London Underground.” Image copyright: TfL

The train – designs for which are part of a new public exhibition at King’s Cross St Pancras Underground station – also features improved accessibility, with step free access from the platform as well as walk-through carriages and wider doors.

The introduction of new trains and a better Tube service will help the Underground keep pace with London’s rapidly rising population and support the city’s economy. The building of the 250 new trains, which will feature attractive internal styling that echoes the Underground’s heritage, will also help to support new jobs and growth elsewhere in the UK.

Transport for London’s (TfL) team has been working with transport design specialists PriestmanGoode to ensure that there was a balance between the design and function of a train that will serve London for decades to come, and respect the world-renowned and instantly recognisable design heritage of London Underground.

The Mayor of London, Boris Johnson, said: “These innovative, eye-catching and sleek new trains will be vital for the continued modernisation of London Underground. From Greenford to Gants Hill, from Alperton to Arnos Grove, they will ferry millions of people across our city, more comfortably, reliably and stylishly than ever before. The New Tube marks a significant step forward in giving Londoners and visitors the accessible and modern transport service that they expect and deserve. These beautiful, air-cooled machines represent the best of British design and innovation. They will help to keep London and its economy moving in the right direction.” 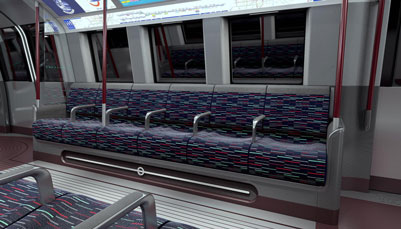 “The New Tube for London will change the face of travel on the Underground” Image copyright: TfL

Mike Brown MVO, Managing Director of London Underground said: “The New Tube for London will change the face of travel on the Underground. The faster, more frequent and more reliable services it will enable will help us keep pace with London’s growing population. The design respects the past but also looks to the future with the very latest technology; including walk-through carriages and wider doors to enable people to get on and off quickly and air-cooling for the first time on the deep level lines.

“Londoners are already seeing huge improvements on the Tube network, with faster and more frequent journeys on the Jubilee and Victoria lines, the modernisation of the Northern line nearing completion this year, and new walk-through, air-cooled trains on the Circle, Hammersmith & City,  Metropolitan and part of the District lines. The New Tube will take the improvements to the next level.”

New Tube for London designed by PriestmanGoode. from Priestmangoode on Vimeo.

The trains will serve London for more than 40 years and will be designed and built to be capable of fully automatic operation. When the new trains first enter service they will have an operator on board. Along with modernised signal systems operating alongside them, the trains will enable faster, more frequent and reliable services with fewer delays, as well as providing greater capacity on all four lines:

Paul Priestman, Designer and Co-founding Director of PriestmanGoode, said: “London’s Tube is one of the most iconic trains around the world. We are proud to have designed something that is part of the very fabric of London life, celebrating all that’s great about London’s environment; cutting edge technology, rich history and diversity.  The New Tube for London will take the city into the future by enriching the everyday journey of its passengers.”

The New Tube for London exhibition is at King’s Cross St Pancras Underground station, Northern ticket hall, from Thursday 9 October until Sunday 16 November. The exhibition features images of the New Tube design, including a fly-through film, giving Londoners a glimpse into the future.

A formal Invitation to tender is expected to be issued in early 2015 and a contract to build the new trains to be awarded in 2016. The first train is expected to come into service on the Piccadilly line in 2022.