Brand new, state of the art buses have hit the streets in Edinburgh and West Lothian… 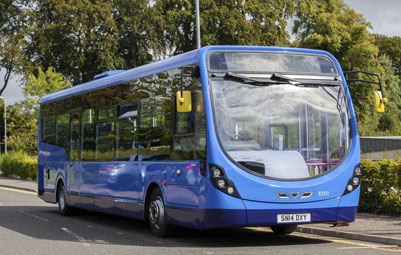 The 18 Micro-Hybrid vehicles come equipped with leather seats, free wifi for customers and extra room for wheelchairs and passengers with buggies

Brand new, state of the art buses have hit the streets in Edinburgh and West Lothian.  Local bus operator, First Scotland East, has ordered 18 brand new vehicles, each worth around £165k, with five of them already in service transporting customers.

The 18 Micro-Hybrid vehicles come equipped with leather seats, free wifi for customers and extra room for wheelchairs and passengers with buggies

First confirmed that the new vehicles will operate on Services 20, 21 and 22, which link Livingston, Broxburn and other towns and villages in West Lothian with Edinburgh. First also said that the new buses will sport one of the most eye-catching and imaginative designs anywhere in Scotland, but for the time being details of the paint job are being kept a closely guarded secret ahead of a high profile launch in October.

To complement the arrival of the new vehicles First revealed that it will improve the frequency of services between Broxburn and Edinburgh.  From October 6th customers will be able to catch a bus every ten minutes at peak times (at the moment First operates three buses an hour).

The 18 Micro-Hybrid vehicles, one of the world’s most fuel efficient buses, come equipped with leather seats, free wifi for customers and extra room for wheelchairs and passengers with buggies.  Each new vehicle is also fitted with the latest energy saving technology including a braking power system similar to that used on Formula 1 racing cars, which re-uses energy to power other parts of the bus.  The Micro-Hybrid buses are also lighter than a conventional single deck bus and, together with advanced engine technology, are around 30% more fuel efficient.

West Lothian councillors Dave King and Carl John were amongst the first to step on board the new vehicle.  Dave King said: “Many of my constituents rely on First’s services and therefore I’m delighted that the company has invested in its fleet.  We want to encourage more people to use public transport, rely less on the private car and thereby help reduce congestion in West Lothian.  These new state of the art buses will undoubtedly attract new customers.”

Carl John said: “I’m thrilled that First has invested £3m in 18 new vehicles for Livingston.  I understand that the new buses are amongst the most fuel efficient in the world and will help reduce emissions in West Lothian.  The buses look fantastic and are certainly very smooth and comfortable to travel in.”

Managing Director of First Scotland East, Paul McGowan, said: “Customers can expect to benefit from an improved service as a result of these new vehicles.  Journeys will be more pleasant, more comfortable, smoother and passengers will be able to keep connected whilst on the move with our free wifi.  In addition, as you would expect with any new vehicle, we will encounter much less faults and breakdowns.”

He continued: “We’ve a range of exciting initiatives planned in the coming months for our West Lothian services, including the introduction of an improved frequency between Broxburn and Edinburgh.  Our £3m investment in 18 new vehicles is a key part of our commitment to improve services and attract more people on to our buses.”

The new buses will operate on Service 20, 21 and 22 which combined provide customers with services every ten minutes between West Lothian and Edinburgh.