First Aberdeen, the city’s leading bus operator, has unveiled 26 state of the art brand new buses, which are amongst the most fuel-efficient in the world…

First Aberdeen, the city’s leading bus operator, has unveiled 26 state of the art brand new buses, which are amongst the most fuel-efficient in the world. 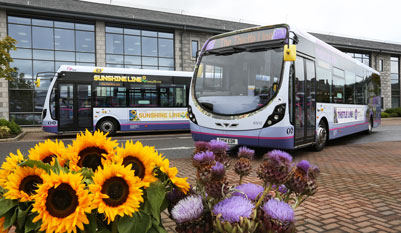 First has invested around £4.3m in the 26 Micro-Hybrid Streetlite vehicles and they are operating on routes 3 and 23.  In order to give those services their own unique identity First Aberdeen has renamed the routes Sunshine Service 23 and Thistle Service 3.  The new buses sport innovative and eye-catching new Sunshine and Thistle branding which will help customers ensure they catch the right bus.

The inspiration behind re-naming Thistle Service 3 was to give it a real Scottish flavour, while Sunshine was chosen as the First Aberdeen creative team state there isn’t a better place in Scotland than Aberdeen when the sun shines.

The new buses come equipped with leather seats, free wifi for customers and extra room for wheelchairs and passengers with buggies.  Each new vehicle is also fitted with the latest energy saving technology including a braking power system similar to that used on Formula 1 racing cars, which re-uses energy to power other parts of the bus.  The Micro-Hybrid buses are also lighter than a conventional single deck bus and, together with advanced engine technology, are around 30% more fuel efficient.

Duncan Cameron, Managing Director of First Aberdeen, said: “The arrival of these state of the art brand new buses is great news for our customers.

“Micro-Hybrids are one of the most fuel efficient buses in the world and we are one of the first companies to take delivery of them.  The fresh new interiors, the complementary wi-fi, leather seats and our brilliant Thistle and Sunshine branding will, I’ve no doubt, be a big hit with passengers.

“In the last two years we’ve invested a total of £7.8m in 49 brand new vehicles (in 2013 First invested £3.5m in 23 buses).  We’ve therefore replaced around a third of our fleet and recognising the importance and popularity of keeping people connected, around one third of our buses are fitted with free wifi.

“Our strategy at First Aberdeen is to continue improving services so that we can attract more people on board.  Investment in new buses and installing free wifi are part of a range of initiatives which is resulting in passenger growth.  Our Platinum services and the introduction of M-Ticketing (using mobile phones as bus tickets) for example have helped attract more people on to our buses.  I can assure our customers that our improvement plans will continue across our network.”

Aberdeen City Council leader, Jenny Laing, said: “I warmly welcome First’s investment in these new fuel-efficient buses, which are very much in line with the City Council’s intent to be at the forefront of new energy developments. I am sure that passengers will also be delighted with the other new features, which will make travelling with young children so much easier and make public transport a more viable option for people with a disability.”

All First Aberdeen’s new Micro-Hybrid Streetlite vehicles are manufactured by Wrightbus.  They are fitted with EURO V engines and feature wi-fi and leather seats as standard.

The new vehicles are the latest in a range of initiatives and investments that First Aberdeen has put in place to improve bus travel for its customers, all of which have contributed to a 2% growth in passengers across the network: