Posted: 15 August 2014 | The British Transport Police Authority | No comments yet 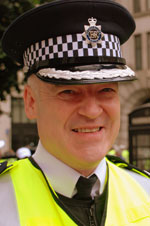 The British Transport Police Authority (BTPA) can today announce the appointment of the new Deputy Chief Constable for the BTP.

Millie Banerjee Chair of the BTPA said: “I am delighted to announce that the Authority has appointed Adrian Hanstock as the new Deputy Chief Constable for BTP.

“This appointment follows a robust and challenging process that brought together a strong and diverse field of candidates.

“Adrian, during all steps of the recruitment process, demonstrated in-depth knowledge, experience and ability and we are confident he will be a strong addition to the Force.”

Adrian is currently a Commander with the Metropolitan Police Service (MPS) serving as Head of Crime and Criminal Justice.

He was the operational commander for the MPS Safer Transport Command and Roads Policing and has extensive experience delivering a policing service in a transport and business environment.

As Commander he has also led major programmes for the MPS including the roll out of body worn video, crime data integrity, performance improvements and stop and search. Earlier in his service Adrian was Borough Commander for Enfield and Staff Officer for the Commissioner, Sir Paul Stephenson.

“As Deputy Adrian has many challenges ahead and will work alongside the Chief to deliver his vision for BTP” added Millie.

“Adrian has shown himself to be the best person to take on this ambitious role and we look forward to working with him and the Chief to deliver the best possible policing on Britain’s railways.”

Adrian is expected to take up his post later in the year.

By The British Transport Police Authority