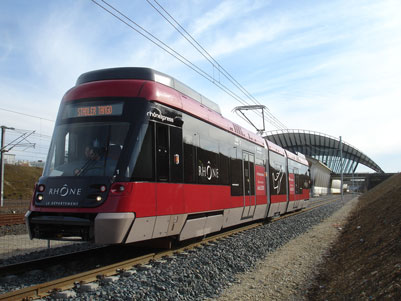 In addition to delivering the vehicles, Stadler will also provide the maintenance of the fleet for 6 + 3 years.

Train manufacturer Stadler will deliver the rolling stock split on trams of the type Variobahn and tram-trains of the type Tango designed for speeds of 80 and 100 km/h respectively. The vehicles for the LRT system in Aarhus will be of the same type already in operation in cities like Bergen (Norway), Croydon (England) and Lyon (France). In 2011, the LRT-system of Bergen was named ‘World’s best light rail’.

In addition to delivering the vehicles, Stadler will also provide the maintenance of the fleet for 6 + 3 years.

Transportation solutions leader Ansaldo STS will supply the infrastructure such as permanent way, power supply, catenary and signalling systems as well as a control and maintenance centre for the light rail project in Aarhus. Ansaldo STS already has a strong track-record in Denmark, where the company successfully has supplied infrastructure for the Copenhagen Metro, named ‘World’s best metro’ and ‘Best driverless Metro’ several times from 2008 to 2012.

“These are indeed strong references, and I am confident that the consortium will provide solid and well-proven technology for Aarhus Light Rail. The fact that we have now chosen the suppliers of the infrastructure and rolling stock is an important milestone for this ambitious project. With the contract in place, the work of constructing the first Light Rail Transit system in Denmark can really take off,” says Claus Rehfeld Moshøj, CEO of Aarhus Light Rail, the public company responsible for the realisation of the LRT-system in Aarhus.

“We are proud of our first order from Denmark”, says Michael Daum, CEO of Stadler Pankow GmbH. “We have prevailed in an international competition and we were able to convince with our technical expertise and track-proven vehicles.”

Stefano Siragusa, CEO of Ansaldo STS, is also pleased with signing the contract:

“We are particularly proud of this new contract awarded in the Danish market. It represents further recognition of Ansaldo STS’ capability and reliability within the design, supply and commissioning of turnkey solutions for both urban and extra urban mass transit systems,” he adds.

The signing of the contract concludes more than one year of negotiations, in which three consortia gave bids on the project.