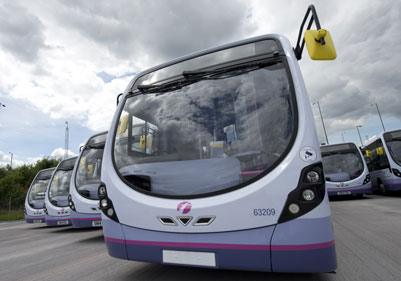 First has invested around £4.3m in 26 Micro-Hybrid Streetlite vehicles, one of the world’s most fuel efficient buses which come equipped with leather seats, free wifi for customers and extra room for wheelchairs and passengers with buggies.

Each new vehicle is fitted with the latest energy saving technology including a braking power system similar to that used on Formula 1 racing cars, which re-uses energy to power other parts of the bus.  The Micro-Hybrid buses are also lighter than a conventional single deck bus and, together with advanced engine technology, are around 30% more fuel efficient.

First Aberdeen said the new vehicles will enter service next month (August) and details of which routes they’ll operate on remain a closely guarded secret for the time being.

“Our £4.3m investment in 26 new vehicles is great news for our customers,” said Managing Director of First Aberdeen, Duncan Cameron.

“Over the last 18-24 months we’ve set about making bus travel more attractive to encourage more people to use our services.  Our strategy is working with more than 1,000 extra people a day travelling with First Aberdeen.  However, we are committed to continuing to invest and improve bus services, and therefore I’m delighted that passengers will benefit from next month with the arrival of these state of the art new buses.”

He continued: “I’m pleased too that our fantastic team will have the opportunity to work with these new vehicles.  Micro-Hybrids are one of the most fuel efficient buses in the world and we will be one of the first companies to take delivery of them.  Our drivers and engineering staff can’t wait to get them on the road.”

All First Aberdeen’s new buses are manufactured by Wrightbus. They will be fitted with EURO V engines and will feature wi-fi and leather seats as standard.   First’s £4.3m 2014 investment in 26 new vehicles follows the introduction of 23 brand new vehicles worth £3.5m in 2013.

The new vehicles are the latest in a range of initiatives and investments that First Aberdeen has put in place to improve bus travel for its customers, all of which have contributed to a growth in passengers of 2% across the network: