Posted: 11 June 2014 | Transport for Greater Manchester | No comments yet

Cutting edge security measures are being trialled on Metrolink in a bid to prevent and tackle the theft of equipment from the system. 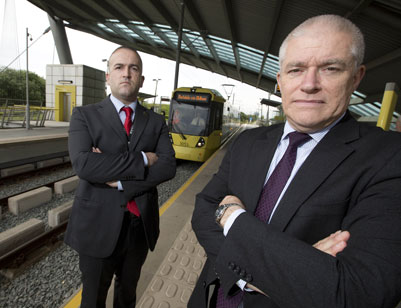 SmartWater liquid leaves a long-lasting, unique identifier that is invisible to the naked eye while Signature Materials provide unique metal ‘signatures’. Both products are linked to national registers, accessible to police, to secure evidence to prosecute criminals.

The trial, being developed to run alongside existing preventative measures, aims to minimise the disruption to passenger journeys that cable theft can cause.

In addition, the trial aims to reduce the high risk of serious injury and increase criminal convictions associated with suchincidents.

In March 2013, John Daw of Carmel Avenue, Salford was jailed for two years and nine months after Manchester Crown Court heard how he had tried to steal metal cables from the Cornbrook area.

He was also ordered to pay £35,000 to cover the damage caused by his attempt which, the court heard, was caused when he cut through fiber optic cables and severed the Metrolink communication system.

Daw also fractured his skull, leg and pelvis after falling 50ft from a viaduct during the incident.

TfGM Metrolink Director Peter Cushing said: “We have done a lot of successful work, with GMP’s guidance, to reduce theft and damage to the network, including CCTV, targeted police operations and replacing desirable cable materials with less valuable but equally functional ones.

“The types of incidents we are targeting can have huge impacts on the network and can cause severe disruptions to passenger journeys.

“It is also important to remember that Metrolink covers its own operating costs without drawing on public subsidy, so expensive damage to the network reduces the funds available for future investment.”

GMP Coordinator for Operation Alloy, John Woods, said: “As part of Operation Alloy, Greater Manchester Police have made a 34 per cent reduction in metal theft when comparing May 2013 to May 2014. The key to this success has been through our work with partners such as Transport for Greater Manchester and it is due to this that we are able to continue to bring those offenders involved in metal theft before the courts.

“Metal theft is not a victimless crime, in fact it causes a huge inconvenience to people in the form of power cuts, trams being put out of service or broadband and telephone networks being affected.”