Glasgow 2014 today (Thursday, May 1) revealed that First Bus has become the latest addition to the Games Sponsor Family. 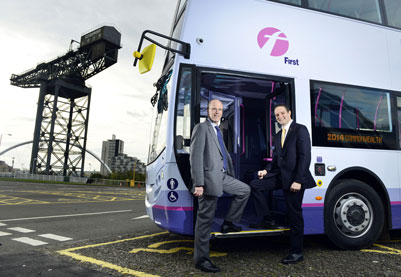 First will provide bus services for all client groups during the Games including athletes, technical officials and the media

First, part of the Aberdeen-based FirstGroup, is the largest bus operator in Scotland and becomes the Official Supporter – Bus Services for the Games having been planning for Glasgow 2014 for more than two years.

The bus operator’s network of high frequency, regular services across the city will be supplemented by designated spectator shuttle services linking principal Games venues within the city centre. First will publish details of its comprehensive Games transport arrangements in the coming weeks.

First will provide bus services for all client groups during the Games including athletes, technical officials and the media.

First currently operates around 950 vehicles across Greater Glasgow. The company will operate additional  buses during the Games in order to transport the large numbers of spectators expected, as well as all the accredited client groups.

The company will also become an Official Supporter of Team Scotland.

“We warmly welcome First to Glasgow 2014’s Sponsor Family. This summer’s Commonwealth Games will see around 6,500 athletes and officials come to Glasgow for 11 days of competition that will put Glasgow and Scotland on the world stage. First’s services will be crucial in helping them move around the city.

“First will also provide additional bus services to help the thousands of extra people expected at Games time, including spectators, visitors and local people enjoying the fantastic action at our venues or those looking to soak up the atmosphere around Glasgow and beyond.”

“We are proud of our Scottish heritage and the important role we play connecting people and communities up and down Scotland, every day.

“The Commonwealth Games, falling in the Year of Homecoming, provides an important opportunity for Scotland to promote itself around the world, and we look forward to playing our part, moving people around Glasgow and Scotland as quickly and efficiently as we can.”

“Glasgow 2014 promises to be one of the most important and spectacular sporting events ever hosted in the UK.

“First Bus is proud of the services that we provide to customers across our Scottish operations and to play an integral role in the success of the Games. Our preparations are nearing completion and are very much looking forward to the start of Glasgow 2014.”

“I am pleased to see yet another sponsor for the Glasgow 2014 Commonwealth Games.  Bus services are an important part of the delivery of a successful event of this magnitude, and First clearly has tremendous expertise and experience in providing transport in Glasgow and beyond.”

“For all athletes competing at Glasgow 2014, a first-class transport system during the Games is high on their list of priorities. It is essential for them to have confidence in the arrangements knowing that they will get to their competition and training venues on time. It is great news that First has come on board and that the transport arrangements are in such experienced hands.”

“It’s great to have First Bus on board as a sponsor of the XX Commonwealth Games. I would encourage people who are coming to watch the Games to take advantage of public transport in Glasgow as much as possible, as it will be the quickest, easiest and most efficient way to get around.

“Transport within the city boundaries is included in the price of Games tickets so it won’t even cost spectators anything extra to travel across Glasgow.

“It’s so inspiring and encouraging that so many big organisations across the country are rallying up and getting behind the Games – which are gearing up to be the best  ever – and Team Scotland.”