On March 27, 2014 a 12 m long battery bus from Solaris with electrical traction and on-board power supply equipment from Vossloh Kiepe went into passenger service with the Braunschweiger Verkehrs-AG as the first of altogether five buses. For the first time ever the modular system from Vossloh Kiepe has been combined with the inductive charging system Primove from Bombardier. 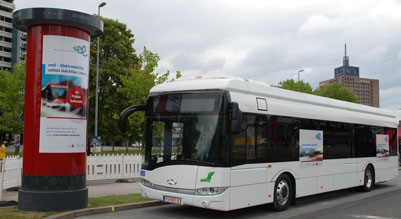 Vossloh Kiepe has delivered all the electrical traction and on-board power supply equipment for the emission-free electric bus.

The innovative vehicle is operated on line 19, a 12 kilometre long circular line, within the scope of the project “Emil” (electric mobility via inductive charging). From October four 18 m long, articulated electric buses will follow little by little.

Vossloh Kiepe has delivered all the electrical traction and on-board power supply equipment for the emission-free electric bus.

Besides the power electronics the equipment includes the 240 kW traction motor and the energy management system. In addition to the provided inductive charging system an additional charging unit for plug-based charging with up to 90 kW has been installed.

For the first time the experienced traction specialist Vossloh Kiepe has integrated the inductive charging system from Bombardier. The 8.9 m and 12 m long battery buses manufactured up to now together with Solaris have always been charged overnight. Thus, an 8.9 m long midibus has been operated successfully in Klagenfurt in the last six months. In Krakow one 12 m long standard bus is being operated, and in Düsseldorf two standard buses will go into line service in the near future.

Vossloh Kiepe has succeeded in using its standard modular components for electric buses for the contactless intermediate charging concept, the so-called opportunity charging, where the electric buses are charged at special stopping places during their dwell time. This modular design can be applied to nearly all variants of electric buses, e.g. hybrid buses, battery buses, fuel cell buses and trolleybuses, and comprises

The system-overlapping interaction of the energy storage unit and the power supply system with the power train and the recharging unit is decisive and is optimised by Vossloh Kiepe’s energy management system.