Transport for London (TfL) has partnered with media and advertising company Clear Channel UK to trial a real-time mapping tool at a Regent Street bus stop. 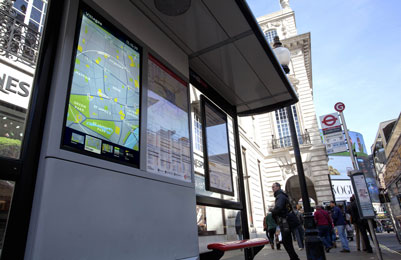 The new mapping tool – the first of its kind to operate in a UK bus shelter – was developed and funded by Clear Channel to coincide with the Year of the Bus – a celebration of both the heritage of London buses and a look ahead to their future.

The panel also offers local area information including maps and walking routes to tourist attractions, theatres and shops. Over the next two months, customer interaction with the panel will be monitored, by Clear Channel UK, and analysed to enhance the service.

With seventy per cent of Londoners now owning a Smartphone and eighty seven per cent using the internet for maps and directions, there is an increased demand from customers to be able to access the information they need to travel around the capital through digital and social media.

Leon Daniels, Managing Director of Surface Transport at TfL, said: “We’re delighted to team up with Clear Channel to make live travel information even more accessible to our customers. Regent Street is an iconic location, used not only by Londoners but tourists from across the world and by giving them live travel information via touchscreen, they will be able to make the most of all transport options to get around the capital, be it on foot, bike, Tube or by an iconic London bus.

“As we celebrate the year of the bus, this is another reminder of how technology has transformed how we communicate with our customers and how they want to receive information from us. Our customers now rightly regard real time travel information as part of the core service we provide and this is an innovative way we can explore getting information they need to them. If the trial is as successful as we hope, then we will work with Clear Channel to introduce the mapping tool to other key sites across London.”

Dave Huckerby, Adshel Development Director at Clear Channel UK, said: “Many people will know Clear Channel as a media company. We also spend a lot of time working with transit and local authorities to improve bus travel for commuters. Recently this has meant allowing people to use their smartphones to interact with bus stops and developing shelters that are more sustainable. Now we’ve been able to bring real-time mapping to the streets of London.”

“This is a highly technical bus shelter and a real glimpse into the future of urban transportation. We’re grateful to TfL for working closely with us. Their knowledge and expertise has allowed us to deliver something of real value to Londoners. The next stage of this trial is to monitor and refine the system as people interact with it.”

TfL is among the world leaders in the provision of free, open data which is currently being used by over 5,000 app developers who are more adept at bringing useful products to the market quickly. TfL’s feeds power hundreds of products, extending the reach of its information and saving its customers tens of millions of pounds every year in time saved.