The Aberdeen Hydrogen Bus Project marked a major milestone today with the unveiling of the first vehicles of Europe’s largest hydrogen bus fleet. 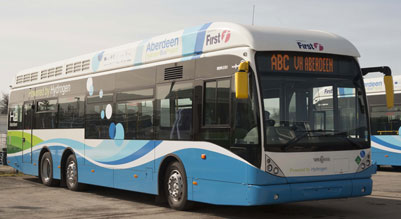 The arrival of the buses signals a significant step forward in the Aberdeen Hydrogen Bus Project (Picture: Aberdeen City Council)

The city council has taken delivery of four of the 10 hydrogen vehicles ordered from Belgian firm Van Hool as part of the Aberdeen Hydrogen Bus Project. The others are due to be delivered in the coming weeks.

The arrival of the buses signals a significant step forward in the Aberdeen Hydrogen Bus Project – the most high-profile of a range of projects designed to create a hydrogen economy in the city.

The Aberdeen City Council-led bus project, which has backing from Europe, the UK Government and the Scottish Government, as well as a broad range of private sector partners, will deliver a hydrogen infrastructure in Aberdeen in 2014. This will include the production of hydrogen from a 1MW electrolyser and establishing a state-of-the-art hydrogen refuelling station, Scotland’s first commercial-scale hydrogen refuelling station that will include hydrogen production through electrolysis, in partnership with BOC.

Council leader Barney Crockett said: “The arrival of these buses in Scotland is absolutely wonderful news. We will have the world’s largest fleet of hydrogen fuel cell buses running on the Aberdeen’s streets, which will help us to not only realise our aspiration of becoming a world-leading city for low carbon technology, but also of maintaining our position as a leading world energy city.

“The Aberdeen Hydrogen Bus Project is a few years in the making now, but this is the first visible step in a very important demonstration project which will help to inform the growth and development of hydrogen technologies and the hydrogen industry, as well as a strong hydrogen economy in Aberdeen. It will have significant benefits locally, nationally and internationally.

“There is a great deal of interest in what we are doing here and a strong focus on how that can be replicated elsewhere. We are learning as we go, which brings the additional benefit of building expertise as we progress, placing Aberdeen in a strong position to be a European centre of excellence in hydrogen technology.”

Transport Minister Keith Brown said: “I am pleased to see the months of hard work on this exciting project paying off and hydrogen fuel cell buses actually arriving on the streets of Aberdeen. The council and other partners should be proud of this achievement – which will see the largest such fleet in Europe.

“With only water vapour being emitted from them and high levels of renewable energy being used to create their hydrogen fuel, these vehicles will be an inspiring example to the people of Scotland of the benefits of our move to a low carbon future for transport.

“The Scottish Government has committed to largely decarbonise the road transport sector by 2050, with substantial progress to be made by 2030. To achieve this challenging target, the contribution of a range of low carbon vehicle technologies will be required with hydrogen fuel cell powered electric vehicles likely to be an important part of Scotland’s future sustainable transport system.”

The Aberdeen Hydrogen Bus Project is a large-scale bus demonstration project, led by Aberdeen City Council. It is testing the economic and environmental benefits of hydrogen transport technologies and aims to drive the development of hydrogen technologies.

The use of hydrogen as a transport fuel offers great promise as a key component of a low carbon energy system. Hydrogen fuel cell vehicles emit no harmful emissions, and are virtually noise free.

Van Hool’s transit bus project manager said Paul Jenné: “All the fuel cell buses operated by First and by Stagecoach have been built to particular specifications. They will be free of any tailpipe emissions, while both the interior and exterior noise level will be much improved, enhancing the passenger comfort level while riding the bus.

“Van Hool believes the buses are the next step to zero emission urban transport.   We are looking forward to a successful project and the start of a long term cooperation.”

Because this hydrogen technology is so new, a considerable amount of education and learning must be carried out before the buses start carrying passengers. The arrival of the buses has been planned in advance of the hydrogen production and re-fuelling facility completion to ensure driver training, technician training and other operational planning can be completed prior to passenger operations commencing.

First Aberdeen director and general manager Duncan Cameron said: “This is an exciting, ground-breaking project which we are delighted and proud to be a part of.

“Over the last 18 months we’ve improved our services and as a result we are now attracting 1,000 more customers a day and helping to ease the city’s congestion problems. The introduction of hydrogen vehicles complements our passenger growth strategy and I’m very confident will attract new users to bus travel.”

Stagecoach North Scotland managing director Steve Walker said: “Stagecoach Bluebird is proud to be involved in the introduction of hydrogen buses in Aberdeen – vehicles that produce water vapour rather than other emissions.

“The project will help ensure a cleaner, greener environment for people living and working in the city. Sustainability is at the heart of Stagecoach’s operations and we provide greener, smarter bus travel for thousands of local people every single day.”

The buses will be officially launched at the All-Energy conference which takes place in Aberdeen on 21 and 22 May.

The buses, which will be integrated into First and Stagecoach operations from May, following an official launch at All-Energy, will be in use on routes across the city by autumn.

The vehicles will be refuelled at Scotland’s first large hydrogen refuelling station, at the council’s Kittybrewster depot. Further refuelling stations are proposed across the city as the Aberdeen Hydrogen Bus Project evolves.

The bus project is part of the Aberdeen hydrogen project H2 Aberdeen, which provides the opportunity to create a new industry and greater choice in energy production and usage, as well as enabling the development of a hydrogen strategy for the Energetica Development Corridor.

It is also part of the HyTrEc (Hydrogen Transport Economy) transnational project which involves: working with EU partners around North Sea to facilitate transnational co-operation and learning; enhancing the competitiveness of the North Sea Region in hydrogen development; and providing a platform for joined-up working towards a hydrogen strategy across the North Sea region.

As well as the benefits to the transport sector, hydrogen has a potentially vital role in the broader energy storage system – if it is generated from intermittent renewable electricity sources, such as wind turbines, it can be stored and used for a variety of purposes including injection into the natural gas grid and used to generate electricity at times of peak demand.

By The Aberdeen City Council