Siemens and the Munich transport corporation (MVG) presented the first of the new C2 series trains to the public in Munich today. This jointly unveiled train will be followed by 20 more by the year 2015, for a total of 126 new metro cars. This order marks the biggest purchase of rolling stock in the history of the Munich Underground. 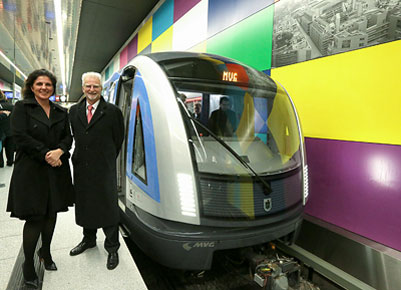 Herbert König, Chairman of the MVG Board and Director of Transportation at SWM (right), and Sandra Gott-Karlbauer, CEO Siemens Urban Transport (left), are presenting the new Munich metro train.

Herbert König, Chairman of the MVG Board and Director of Transportation at SWM: “Our new underground train has an even higher capacity, a sophisticated LED-based lighting concept and new signal elements on the doors. The C2 will once again set the standards for a modern and high-performance metro system. The new train will not only provide good service, it will also impress the public with its good look!”

“Our new train is one of the most modern and most beautiful metros in the world – ‘Made in Vienna and Munich’. We are very pleased that we were able to present the first train to the public,” said Sandra Gott-Karlbauer, CEO Siemens Urban Transport.

The C2 trains are even more spacious, comfortable and powerful than the previous models. It is a further development of the C1 train, which has been in operation for the Munich Underground since 2002. The train consists of six cars, is 115 meters long, has a 4,500 hp rating, and accelerates from 0 to 80 km/h in only 15 seconds.

The C2 sets itself apart from the previous models with its higher passenger capacity and its substantially improved interior lighting. Generously dimensioned spiral lamps illuminate the entrances large, while LED light strips on the doors indicate the status of doors to ensure smooth passenger interchange. Like their predecessors, the C2 offers end-to-end accessibility and therefore a high degree of transparency, high loading capability and safety.

This new Munich metro train has already won three design awards. Only the week before last, this new-generation vehicle from Neumeister and Partner Industrial Design won the German Design Prize. According to the official wording of the award, the jury was above all impressed by the “fantastic use of light in the interior”. Before that, the new metro trains had received the Universal Design Award 2013 for their design. And, last but not least, it had garnered the Red Dot Award 2013 for product design. In the opinion of the jury, the C2 embodies the fulfillment of different user group requirements in one modern public transportation vehicle.