Time to give Victoria a makeover fit for a queen

Posted: 6 February 2014 | Transport for Greater Manchester | No comments yet

Work on a major, multi-million pound transformation of the Manchester Victoria Metrolink stop is set to start on Friday, 21 February…

Work on a major, multi-million pound transformation of the Manchester Victoria Metrolink stop is set to start on Friday, 21 February.

The nine-month project will see the stop completely redesigned and expanded to provide additional platforms and tracks, accommodating the new Second City Crossing and wider network expansion – in conjunction with the transformation of the railway station by Network Rail.

As a result of this work there will also be temporary changes to Metrolink services for the duration of the project. 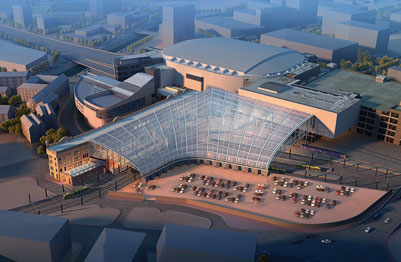 Then, from Monday 24 February** onwards, trams will have to pass through Victoria in both directions on a single line of track. In order to safely maximise the number of trams that can run on the single line the stop will be temporarily closed to passengers.

Instead, passengers will be asked to use Shudehill, the next city centre stop along and just a short walk for connections with Victoria’s rail services and the Phones 4u arena.

Metrolink services will also change for the duration of the work:

A comprehensive public information campaign will launch in the coming weeks to support passengers through the changes and to keep people up to date with the latest developments.

Peter Cushing, TfGM’s Metrolink Director, said: “The Victoria project is incredibly exciting, it complements the wider transformation of the station but also plays an essential part of Metrolink’s Second City Crossing development and on-going expansion of the network.

“To ensure this is done in a safe manner, we have to run on a single line of track. Currently, 15 trams an hour call at Victoria in each direction – that’s 30 overall, which simply cannot be sustained when we’re running on just a single line.

“So we’re temporarily closing the stop and asking people to use the nearby Shudehill stop instead. We’re also making changes to services on the Bury line, which will be supported by running double trams on every service from Bury to Altrincham via the city.

“We’ve considered these changes very carefully and they will provide customers with the most effective, safest and least disruptive option. They also mirror demand we’ve monitored on the network.”

Additional signage and ticket vending facilities will be provided at Shudehill, and Metrolink staff will be on hand during the busiest times. Additional measures will also be put in place to cater for demand during events at the nearby arena.

**Metrolink changes from Monday 24 February for circa nine months: