Go North East has officially opened a brand new £8.5 million super depot, bringing its investment in the region to £30 million over the last two years…

Go North East, the region’s largest bus operator, has officially opened a brand new £8.5 million super depot, bringing its investment in the region to £30 million over the last two years. 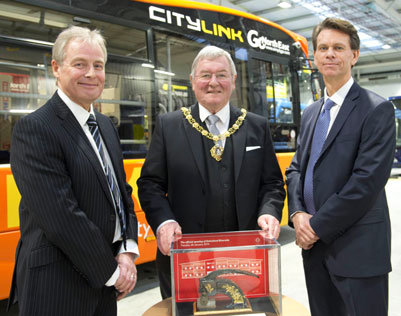 The 3,500m2 depot will accommodate 160 buses and will be home to more than 500 drivers and engineering staff.

The new, high-tech facility replaces depots at Sunderland Road in Gateshead and Winlaton that date back to the days of the tramways. All employees at these bases are transferring to the new building, which includes a brand new driver training school and the company’s occupational health department.

Kevin Carr, Go North East Managing Director, said: “This depot is the culmination of a significant 30 million pound investment programme for our business in the region. We’ve bought more than 100 new buses for our services in Gateshead, Newcastle, Sunderland, and Consett and invested £8.5 million in this new facility in Gateshead. We are incredibly proud to have celebrated our 100th year in 2013 and this investment marks our dedication to serving the people of the north east with modern, efficient vehicles.”

David Brown, Group Chief Executive at Go-Ahead, said; “Local services are at their best when they are delivered locally by the people who know their customers and the area inside-out. We have more than 2,000 employees living and working right here in the North East. They don’t stand apart from the community – they are part of the community. And I would like to pay tribute to all of the staff of Go North East. It is only by running a successful, profitable bus company that investment can be made. This brand new depot is solid proof of our long-term commitment to running buses in the north-east. This is an £8 million investment which goes alongside the £22 million spent on new buses over the last two years; every penny made in the north east has been re-invested in the north east.”

The depot, developed by UKLEP and built by Surgo, breathes new life into 5.75 acres of brownfield land on Handy Drive, which was formerly the site of Dunston Power Station.

The depot’s 160 buses will operate on 120 services and drive 163,000 miles a week, with all vehicles returning to the depot each evening to be refuelled and washed over night.

The Mayor of Gateshead, Cllr Jack Graham MBE, said: “There are few companies in Gateshead that can trace their history much further back than Go North East, and fewer still that can still claim to be based where they first started, here in Gateshead. With 500 employees based here, Go North East is Gateshead’s largest private sector employer. It gives me great pleasure to officially declare the Go North East Gateshead Riverside open.”

The depot has storage for 140,000 litres of diesel fuel and four spill-free, high tech high-speed fuel pumps capable of delivering 90 litres per minute.

The depot becomes operational on the night of 1st/2nd February.