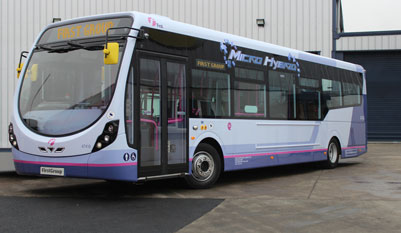 FirstGroup, the leading transport operator in the UK and North America, today announced that its UK bus division has ordered 425 new vehicles worth £70 million for delivery in the 2014/15 financial year.

First’s order, which includes six electric vehicles, represents its biggest ever investment in new buses in the UK, for services outside London, and brings the company’s total investment in 2,000 new vehicles to around £310 million over four years.

All but six of First’s new buses will be manufactured in the UK with Ballymena based Wrightbus winning the largest contract. First has placed an order for 301 Wrightbus vehicles including 274 of its ‘StreetLite Micro Hybrid’ buses, one of the most fuel efficient buses on the market.

First and Wrightbus have worked in partnership throughout 2013 to test, trial and develop the Micro Hybrid buses. They are diesel vehicles which incorporate an innovative new on-board hybrid system improving fuel efficiency by around 10%. FirstGroup will be the first company to operate these new buses.

“Investment in our bus division continues apace,” said Giles Fearnley, Managing Director of First UK Bus. This is our biggest order on record for services entirely outside London. We operate in 40 of the UK’s largest towns and cities and our investment will help support the communities we serve. This order is great news for our customers and underlines our commitment to growing our business and encouraging more people to use our services and use them more often.”

He continued: “Our ground-breaking partnership with Wrightbus will deliver unsurpassed levels of fuel efficiency, which, until recently few within in the bus industry would have believed possible. In 2013 we laid down the gauntlet to bus manufacturers to work with us to minimise fuel consumption. Wrightbus embraced that challenge and together we’ve developed its StreetLite Micro Hybrid product. I am immensely proud of our collective achievements and we’re very much looking forward to being the first operator to take delivery of these revolutionary new vehicles.”

Group Managing Director of Wrights Group, Mark Nodder, said: “When Giles Fearnley challenged us to develop a bus which was not only attractive and reliable, but which lead the industry in fuel efficiency, we grasped the opportunity with both hands. With the encouragement and support of First’s engineering team we brainstormed and trialled a host of innovative ideas before settling on the system now embodied in the StreetLite Micro Hybrid. The result for Wrightbus has been this excellent new order, and for First a fuel savings dividend from a fleet of brilliant new buses.”

First has also placed orders with other UK manufacturers.Falkirk based ADL has secured a contract for 97 vehicles including 60 double-deckers. Leeds company Optare will anufacture 21, including six electric vehicles, and Volvo Group UK will build six coaches.

All First’s new buses will be fitted with EURO V engines and will feature Wi-Fi and leather seats as standard.