Posted: 13 January 2014 | Transport for Greater Manchester | No comments yet 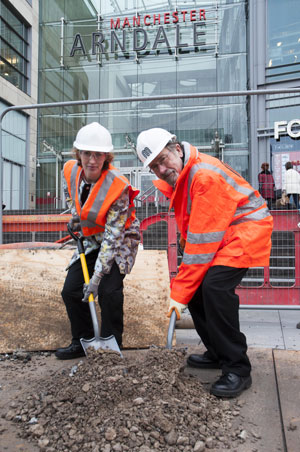 Work to deliver a second Metrolink line through the heart of Manchester city centre – providing greater capacity and resilience across the network – is now under way with the start of utility diversions.The three-year programme will see the creation of the new multi-million pound Second City Crossing (2CC), enabling more trams to cross the city centre and, in turn, increasing the capacity, flexibility and reliability of the system.

The first stage of work – to divert gas pipes and electricity and phone cables buried in the highway away from the footprint of the new tramway – has now started on Corporation Street, between Withy Grove and Market Street.

Trenches are being created so new ducting can be laid for pipes and cables. Localised road closures and diversions are in place but access to businesses in the area will be maintained at all times.

Councillor Andrew Fender, Chair of the Transport for Greater Manchester (TfGM) Committee, said: “This is a moment in time akin to the first spade hitting the ground when the first ever Metrolink line was being built almost 25 years ago.

“It is a symbol of just how successful it has become in that time, such that we now need a second city crossing to increase the capacity, flexibility and reliability of the network.

“It will enable the system and all of its new lines to operate to the fullest, and meet the growing demand that already sees more than 27 million journeys made on our trams each year.”

Councillor Kate Chappell, Manchester City Council’s Executive Member for Environment, said: “This is an important new link which will greatly improve our public transport network and make it far easier both for residents and the huge number of visitors who come into Manchester to get across the city centre.”

The new route will begin in Lower Mosley Street and run through St Peter’s Square, before turning down Princess Street and then heading along Cross Street and Corporation Street before re-joining the existing Metrolink line just outside Victoria.

As part of the project, new stops will be built in Exchange Square and St Peter’s Square.

A number of work sites will also be set up in the St Peter’s Square area, and TfGM is working closely with Manchester City Council to minimise any disruption and ensure the works are integrated with other developments in the city centre.

From January onwards, work will be carried out at various sections of the 2CC route until its completion in early 2017. However, subject to ERDF funding, the section to Exchange Square could be complete in 2015.

Powers to install the second Metrolink route were formally approved by the government in November following a public inquiry earlier this year and a major public consultation in 2011.

TfGM’s dedicated engagement team, who have been engaging with stakeholders in the city for some time, will continue to share details on the delivery of the scheme directly with businesses and individuals throughout the project.