Smart ticketing takes the next step in Greater Manchester

Posted: 18 November 2013 | Transport for Greater Manchester | No comments yet

The countdown to using smart ticketing in Greater Manchester has begun with more than 350 new ‘smart readers’ being installed across the Metrolink network. 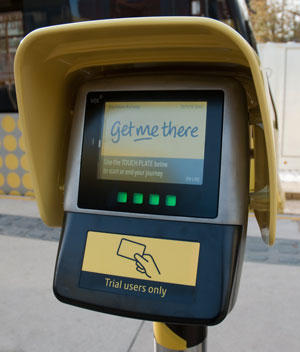 Transport for Greater Manchester, which is funding the creation of get me there, today confirmed that some passengers could be using their existing concessionary passes to travel on trams as soon as spring next year. This is scheduled to roll out to all Metrolink customers by autumn 2014.

From today customers can pre-register their interest in the scheme online at the new www.getmethere.com website, ensuring they stay up to date and know as soon as get me there is ready for them.

Councillor Andrew Fender, Chair of the Transport for Greater Manchester Committee, said: “Smart ticketing has the potential to transform the passenger experience and is as significant a development for public transport in Greater Manchester as the building of Metrolink was back in 1992.

“We’ll be rolling out the scheme in phases during 2014, making sure that different customer groups get used to it. Travelling with get me there will feel a bit different to start with, but we’re confident passengers will quickly recognise it’s a much easier and hassle-free way of using public transport.”

Metrolink passengers will be the first to use get me there from spring next year, using the new ‘smart readers’ being installed now on Metrolink stops to touch in and touch out at the start and end of every tram journey.

Over half a million Greater Manchester commuters already have get me there-ready smart cards in their pocket in the shape of an over-60s bus pass or an under-16s igo pass. It is these over-60s pass holders who will be the first to start using their cards on Metrolink, when the first phase of the rollout starts in spring.

Cllr Fender said: “TfGM’s concession allows the over-60s to travel on Metrolink for free after 9.30am so this provides us with an ideal opportunity to introduce the live system to customers in stages before we extend to everyone.”

Season ticket holders will be next to come on board when existing customers will be invited to switch from the current paper-based system and start using get me there.

This will happen when new smart cards – called my get me there – are available. At this stage, customers will be able to buy travel credit – a smart ‘pot’ of money to use for individual journeys – and new-style travelcards, which will be better-value versions of the currently available Metrolink season tickets.

The final stage of the Metrolink rollout will be when contactless bank cards are accepted by get me there later in 2014. Passengers will be kept informed at each stage and what it means for them.

Bus passengers make more than eight out of every ten public transport journeys and the aspiration is for get me there to be available on buses in 2015, once agreements are in place with Greater Manchester’s bus operators.

Cllr Fender said: “Involving all the bus companies is vital to the success of get me there. Through GMTL, the partnership organisation representing all the bus and train companies operating in the region, we are working in partnership to make sure that passengers can combine different modes of transport together under get me there in a simple and easy to understand way.”

Richard Soper, First Group’s Strategic Development Director for the North of England and chair of GMTL, said: “Bus operators recognise how much of a benefit get me there will be for many of their customers and want to see it introduced as soon as is practicable.

“There is a lot of behind-the-scenes work which needs to be done to make that happen and I am pleased that we continue to make progress in doing that, working with TfGM towards a shared ambition.”

The get me there website – www.getmethere.com – has lots of useful information on how the system will work for different types of passengers. Users of all the various modes of public transport can pre-register on the website so that they can be notified as soon as get me there is ready for them.

Cllr Fender said: “Smart ticketing is the future for public transport in Greater Manchester and it’s exciting to realise that it’s close to becoming a reality. Passengers will be starting to see the smart readers appearing on their Metrolink stops and they now have the chance to pre-register so they can be at the head of the queue and start using get me there as soon as it becomes available for them.”