Posted: 14 November 2013 | Transport for Greater Manchester | No comments yet

Rochdale’s £11.5m transport interchange opens its doors to the public on Sunday 17 November. 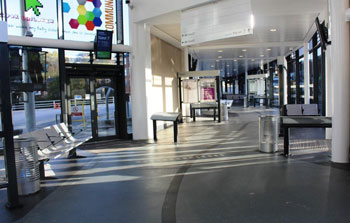 The new interchange, which is located on Smith Street next to the old bus station, will provide enhanced levels of facilities and improved safety and security for bus passengers and will link directly with the new Metrolink extension, due to be completed by Spring 2014

The development, which stands next to Rochdale Council’s award winning new office building and customer service centre, Number One Riverside, replaces the town’s old bus station which was built in 1978.

The new facility will be Europe’s first transport interchange to have an integrated hydropower source, thanks to an innovative hydroelectric plant part-funded by the Ticket to Kyoto carbon reduction investment project.

The scheme, which was part-funded by the Department for Transport and built by Kier Construction, is part of the wider £250m redevelopment of Rochdale town centre, which includes the construction of Number One Riverside, the new Metrolink line and a £100m new retail and leisure development.

The opening of the interchange paves the way for the demolition of the old council office, known as the black box, and the old bus station, which will make way for the proposed shopping and family leisure facility.

The car park above the bus station will remain operational for the immediate future while the walkways into the Wheatsheaf Shopping Centre, Marks & Spencer and Yorkshire Street will also stay open for the short term.

Councillor Andrew Fender, Chair of the Transport for Greater Manchester Committee, said: “I am delighted that we have completed this innovative and hugely significant project that will provide a fantastic, modern gateway for the town centre and a European first, thanks to its hydropower plant.

“The interchange will provide better links between rail and bus services as well as improved waiting areas, passenger facilities, accessibility, information, safety and security. The facility is also going to play a crucial part in making Rochdale an exciting destination for residents, shoppers and businesses alike.”

Councillor Peter Williams, Cabinet Member for Economic Development at Rochdale Borough Council, said: “The opening of this state-of-the-art facility will make a huge difference to our residents and visitors. It is a first class facility which is safe and welcoming and which sits impressively alongside our new customer service centre and offices, which have also been built in a highly sustainable way.”

Councillor Cecile Biant, Chair of Rochdale Township, said: “It is fitting that this interchange is opening to the public as we come to the end of a momentous year for Rochdale. We have already made huge progress on the regeneration of the town centre and look forward to even more exciting changes in Rochdale in the months to come.”

Minister of State for Transport Baroness Kramer said: “I am pleased the Department for Transport has been able to support this scheme. It will make bus travel more attractive in Rochdale, promoting growth and cutting carbon. Redevelopment of the existing bus station site is expected to bring some 1,500 new jobs into the town.”