Posted: 28 October 2013 | Department for Transport | No comments yet

Five local authorities are to receive funding to cut pollution from buses, improving air quality in towns and cities across England… 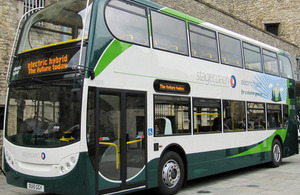 This extra funding means more buses can be cleaned up so that they put out less pollution. Dozens of buses in 5 distinct areas will be improved with the money I am making available today, improving air quality for local communities. It will also boost jobs and growth by helping to stimulate our cutting edge green technology.

I look forward to seeing the results of all the initiatives under the Clean Bus Technology Fund and I hope other local authorities will follow suit.

The 5 local authorities will each receive grants of between £23,700 and £750,000 to retrofit the buses. This new funding comes 2 months after an initial £5 million was awarded to 11 local authorities to reduce harmful emissions from 392 buses followed by a further £1.1 million to 5 authorities to upgrade 45 buses.

Authorities set to benefit are:

All of these authorities have proposed to use Selective Catalytic Reduction technology fitted to exhaust systems to reduce pollutants.

London has seen significant reductions in pollution after DfT provided £5 million, match funded by the Mayor, to retrofit exhaust technology to 900 buses.

Today’s (28 October 2013) announcement follows careful assessment of bids after the launch of the Clean Bus Technology Fund in June 2013. Thirty-one local authorities in England (outside of Greater London) bid for grants of up to £1 million to support upgrading buses with pollution-reducing technology on the routes where air quality does not meet European Commission standards.

By Department for Transport