The first of a £40 million fleet of new Midland Metro trams was officially unveiled today (October 16) after successfully completing a four day, 1,000 mile journey from Spain. 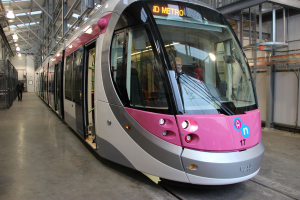 Sir Albert Bore, leader of Birmingham City Council took the wraps off the tram during a ceremony at the newly extended Midland Metro depot in Wednesbury.

The vehicle is the first of 20 being delivered to transport authority Centro over the coming months by Spanish manufacturer CAF.

The new trams will go into service on the existing Metro route between Birmingham and Wolverhampton next year after undergoing several months of testing followed by a period of driver training.

They will also be deployed on the Metro extension now being constructed through Birmingham which, when completed in 2015, will see trams return to the city’s streets for the first time in more than 60 years.

Sir Albert said: “The delivery of the first tram is a real milestone because Metro has a key role to play in the on-going development of our transport network so that it can underpin economic growth right across the West Midlands.

“Work is already underway on the city centre extension, but we are now planning to take the Metro on further to Centenary Square as well as extending it through Wolverhampton city centre to the railway station.”

Centro chief executive, Geoff Inskip, added: “The new trams and the forthcoming extensions mark the start of an exciting new chapter for the Midland Metro system which together with improvements to our local heavy rail system can provide the transport connections we need to regenerate the West Midlands and secure the maximum economic benefits possible from the forthcoming HS2 high speed rail line.”

Running between Snow Hill Station and a rebuilt New Street Station, the Birmingham city centre extension will see the new silver and magenta-coloured trams deliver millions of people a year straight into the heart of the city’s main shopping district.

The extension is also expected to create more than 1,300 new jobs and boost the West Midlands economy by more than £50 million a year.

Centro chairman, Cllr John McNicholas, said: “It’s fantastic to see the first of these very high quality trams arrive from Spain not least because they will bring real benefits for passengers.

“Not only will they provide a more comfortable journey but the extra capacity means we will be able to run a six minute frequency throughout the day, helping to increase the number of people we can carry on the system each year.”

The arrival of the first tram required a significant logistical operation over land and sea.

It was loaded in two separate pieces onto low loader trucks at CAF’s factory in Zaragoza before being taken under police escort to the Spanish port of Santander.

From there it was taken by ship to Plymouth where the trucks were met by a British police escort for their onward journey to Wednesbury.

The new Urbos 3 tram is a third bigger than the Metro’s existing 16-strong fleet of Ansaldo Trasporti models, carrying around 200 passengers compared to 156.

This, together with a frequency of ten trams an hour, will increase overall capacity by 40 per cent, easing the overcrowding that sometimes occurs during peak times as a result of the Metro’s popularity.

Although there are no tram manufacturers in the UK, CAF does employ around 50 people in this country at offices in Coventry, Edinburgh, and Belfast.

The introduction of the new Midland Metro fleet will be project managed from CAF’s Coventry office while a further 10 jobs are being created at the expanded Wednesbury depot.

The company’s trams are used in cities around the world including Zaragoza, Seville and Belgrade and it is currently manufacturing models for Houston and Nantes as well as the West Midlands.

The new, bigger trams have required the Metro’s existing maintenance depot in Potters Lane, Wednesbury to be remodelled and extended.

The project, which is costing nearly £14 million, was carried out by Morgan Sindall and involves a 42 metre extension to the east of the existing maintenance shed along with additional maintenance berths, four new stabling sidings and a separate testing and commissioning shed.

Jag Paddam, managing director of infrastructure at Morgan Sindall, said: ‘Morgan Sindall is proud to be associated with the new Metro extension.

“This complex project has been undertaken with minimal disruption to the day-to-day running of the tram service thanks to a collaborative approach between our project team and the operations staff at the depot.

“We hope that passengers enjoy the comfort and convenience of travelling in the new trams.”