City of Lublin powers buses with solar cells from Midsummer

The Lublin solar bus project will initially run for two years, after which it will be evaluated…

The Municipal Transport Company (MPK) in Lublin has installed photovoltaic thin film CIGS solar panels on its buses’ roofs. The solar panels turn solar energy into electric energy and are used to load the buses’ batteries. This will decrease the buses’ alternators load, leading to lower fuel consumption and bringing both economic and ecological profits.

Potential savings are estimated at up to 8,000 zloty (1,900 euro) per bus per year. The system’s payback period is estimated at a mere two years, taking into consideration only the fuel consumption reduction and not the overall environmental benefits. After two years, the solar energy solution will create compound surpluses for MPK for the remainder of the panels’ life span that will outlast the lifetime of the bus.

The Lublin solar bus project will initially run for two years, after which it will be evaluated. The first solar bus is already in operation.

The thin film solar cells have been manufactured by Midsummer, a leading Swedish supplier of equipment for cost effective manufacturing of CIGS thin film flexible solar cells, and installed on MPK’s fleet of Scania buses. The project is a cooperation between MPK and the Lublin University of Technology.

Ideal for vehicles and buildings

“As opposed to the more traditional silicon-based solar cells, thin film CIGS solar panels are flexible and light weight and therefore ideal to be mounted on moving vehicles – and also on many buildings, landfills etc,” said Sven Lindström, CEO, Midsummer. “If a city in north central Europe can install thin film solar panels on its public transport vehicles with energy cost efficiency and a short payback period, imagine the potential for larger cities in sunnier parts of the world for introducing solar energy to its vehicles and buildings.”

“We firmly believe that thin film CIGS solar cells are the solar cells of the future. They are increasingly efficient and have many advantages over traditional silicon-based solar cells. They are durable, can withstand vibrations, can be curved and bent, and can be manufactured cost-efficiently in small volumes.” 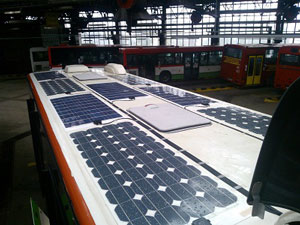 Midsummer’s “DUO” is a unique and compact CIGS turn-key system with a 5 MW annual production capacity. Midsummer’s CIGS cells looks like crystalline silicon solar cells, but are made on stainless steel substrates. This makes the cells suitable not only for regular solar panels, but also for flexible, light weight panels that can be used on membrane roofs, landfills or other structures where the traditional glass modules cannot be applied.

“The thin film panels on the buses in Lublin are characterized by flexibility and shock resistance,” said Professor  from the Faculty of Thermodynamics, Fluid Mechanics and Aerospace Propulsion at University of Technology in Lublin in an earlier interview with the Polish Press Agency. “These cells have better absorption feature than traditional silicon wafers. They can be configured at will and placed on any roof.”

MPK Lublin Ltd. is the biggest public transport carrier in Lublin with a fleet of 60 trolleybuses and 215 buses. Lublin is a city on eastern Poland with a population of approx. 350,000 inhabitants.