Voi says it will work with the RNIB to assess the results of the scheme, which will also involve making its scooter racks more visible to those with impaired vision. 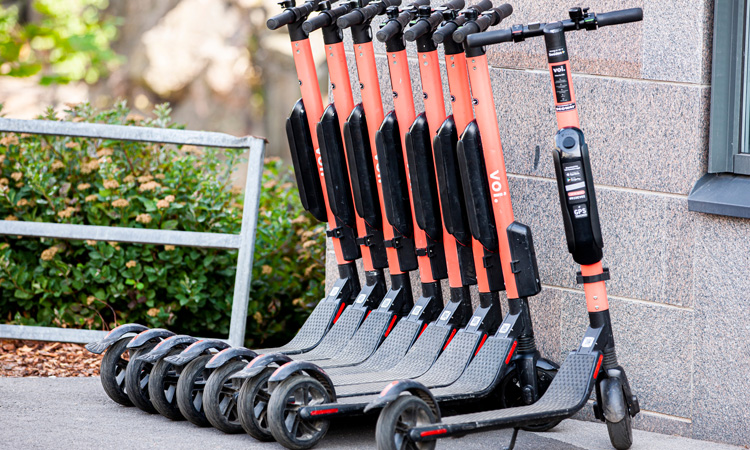 E-scooter provider Voi is installing sound on e-scooters in three cities to combat pavement riding and help protect pedestrians with sight loss as part of the trial of e-scooters across the UK.

Voi engineers have designed a bespoke ‘low hum’ which will be added to Voi’s bright “coral” e-scooters to alert other road users that an e-scooter is approaching. The noise replicates the types of artificial engine noise introduced on electric cars in recent years and can be adapted and improved by Voi, based on feedback from users and the visually impairment community.

Over the next three months between June to August, Voi will be adding the sound to 60 e-scooters in its three largest cities; Birmingham, Liverpool and Bristol. The micromobility company says it will be running in-person testing events with sight loss organisations and local authorities to get their feedback on the sound in a real-world environment. Voi will be working with the Royal National Institute of Blind People (RNIB) to manage the sessions as part of a wider collaboration to ensure people with sight loss are not adversely affected by e-scooter pilots.

The e-scooter sound pilot will run alongside a formal written consultation to gather feedback from visual impairment organisations, local authorities and police forces regarding the use of artificial vehicle alert systems. Voi says it will also reach out to Voi riders via email, prompting a questionnaire to identify whether the sound impacted the user experience.

At the end of the three months, Voi will work with the RNIB to assess the feedback and publish its findings.

Earlier this month Voi announced the launch of redesigned coral pink parking racks created in partnership with the RNIB, to improve visibility and address mobility issues faced by blind and partially sighted people. The parking racks have extended and raised side panels and increased colour contrast to help them stand out better visually and help cane users locate and avoid the scooter rack more easily. The first RNIB-designed racks have been installed in Birmingham and will be rolled out in areas where Voi is trialling its e-scooters, to improve safe parking and limit street clutter.

Voi says it is also focussing on user education and innovative features that encourage good parking behaviour including an ‘end of the ride photo’ feature which requires riders to take and submit a photo of their parked scooter after each ride which is then reviewed by Voi’s support team. So far, Voi claims it has seen a 70 per cent improvement in good parking behaviour with the introduction of this feature.

“Electric engines on e-scooters, like those on electric cars and buses, are extremely quiet which can be unnerving to other road users,” said Jack Samler, General Manager at Voi UK and Ireland.

“By adding an appropriate sound we can hopefully improve the safety of our operations for all road users, including those who are vulnerable because of sight loss. This is the latest pilot as part of our partnership with the RNIB to address mobility issues faced by blind and partially sighted people. We’re looking forward to testing the new sound in the West of England, Birmingham and Liverpool and evaluating the impact it has during the trials.”

“We are collaborating with the industry to create solutions which are sensitive to the needs of blind and partially sighted people. An audible warning is one such solution and we look forward to receiving feedback from the community,” added Robin Spinks, RNIB Strategic Lead Innovation Partnerships.