Having successfully delivered the first of 22 new Citadis trams to Nottingham, Alstom has now unveiled a new look for one of the existing trams.

Concentrating on Alstom’s role in the extension to Nottingham’s tram network, the wrap highlights the new trams, new routes and new destinations that people living in the city will be able to enjoy.

Terence Watson, Alstom’s UK President, said: “We’re delighted to be able to showcase the work we’re doing in Nottingham with this new wrap which shows that not only do we have an important role to play in the city but also that we’re here to stay.” 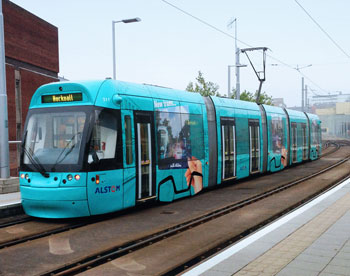 The wrap highlights the new routes available to local people by showing images of the new trams operating in Market Square, Theatre Square, Beeston Town Centre, Clifton, the QMC and Wilford Toll Bridge, with the tram wrap designed by local agency The Wonderland.

Alstom is also responsible for maintaining all of Nottingham’s trams, both the existing designs and also the new Citadis models, at the Wilkinson Street depot.