The Trapeze Group has won a major contract from the English city of Brighton & Hove: Brighton & Hove City Council in partnership with the neighbouring local authority, East Sussex County Council, and the local bus operator, Brighton & Hove Bus and Coach Company, have awarded Trapeze a contract for supplying and installing a state-of-the-art integrated ITCS operations control system. Furthermore, the two authorities have ordered additional bus stop displays for Brighton & Hove and East Sussex, and also entrusted Trapeze with updating the communications system. This order strengthens Trapeze’s position in the United Kingdom and throughout its European home market. 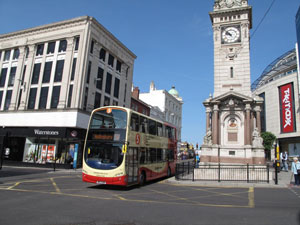 Brighton & Hove Bus and Coach Company Ltd is a bus company operating along the south east coast of England. With their fleet of almost 300 vehicles, they move more than 40 million passengers every year. The vehicles serve over 50 routes with more than 2,000 stops. The company has around 1,200 employees.

Brighton & Hove Bus and Coach Company Ltd has been a Trapeze customer for over ten years and has owned an operations control system since 2001. This system was subsequently extended by sharing the radio and server infrastructure of East Sussex County Council, which was made available to other bus companies within the county administration

The modernisation of the operations control system entails numerous technical as well as commercial benefits for the bus company. The newest-generation Trapeze operations control system enables Brighton & Hove Bus and Coach Company Ltd to further enhance the efficiency of their entire bus fleet management. Moreover, it also allows vehicles of other bus operators to be integrated in the control system in the future and allows for the number of bus stop displays for real-time information to be gradually increased.

In the next two years, Trapeze is to supply and install cutting-edge hardware and software for the state-of-the-art ITCS Intelligent Transport System as well as mobile technologies. This includes a hardware and software upgrade to the advanced on-board computers for accurate position location of vehicles and for direct voice and data communications with the bus company’s control centre.

What is also to be renewed is the entire communications solution between the control centre, the vehicles and the bus stop displays on the basis of GPRS/UMTS. For this purpose, the latest communications technology is to be used. The project launch is scheduled for 1 November 2013, and the entire period of execution is estimated at 14 months.