The new metro trains from Siemens started to operate yesterday in Warsaw, the Polish capital. Together, Hanna Gronkiewicz-Waltz, Mayor of Warsaw, Jerzy Lejk, CEO of the Warsaw Metro, and Jochen Eickholt, CEO of Siemens Rail Systems, sent off the first train on line 1 with passengers on board. For Siemens, this also marked the first regular passenger operation of the new generation of Inspiro metro trains. Two trains are now already running in Warsaw. A total of 35 six-car metro trains were ordered in February 2011, 15 more of which will come into operation one by one by the end of the year. 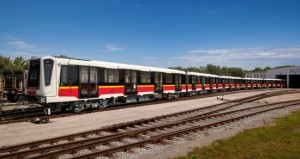 “It is always a proud moment for us at Siemens to see a vision come true – and officially turn it over for public service. And this particular project – the Warsaw Inspiro – is especially important. It was the first order worldwide for our new metro generation. And it was the biggest order Siemens has ever received in Poland. Just as important, the Inspiro marks the beginning of a new partnership in Poland”, said Jochen Eickholt, CEO of Siemens’ Rail Systems Division.

With the Inspiro Metro Warsaw project Siemens has designed the first new train generation based on the Inspiro platform. Priority was given to a light-weight construction, energy savings, good maintainability and sustainability. Due to the use of natural and recyclable materials, the Inspiro is 94.8 percent recyclable. Thanks to the Inspiro’s high efficiency, the greenhouse gas emissions during the operating phase are much lower than in private transportation. Compared to a car with an internal combustion engine, the Inspiro reduces greenhouse gas emissions by as much as 88 percent per passenger.

A number of new design concepts and features are implemented based on Siemens’ wide range of operating experience and using proven components. The interior and exterior design of the Inspiro, the complete accessibility and the optimized floor plan are all among the particular strengths of the vehicle and improve the passenger comfort. The vehicle design that was developed in cooperation with Designworks USA, a subsidiary of BMW Group, sets new standards with the futuristic front module and the side doors with their attractive octogonal look. The open and modern interior underlines the attractiveness of the metro. Together with the walk-through configuration of the train, the interior design gives passengers a significantly improved sense of security.

The passenger area is completely free of equipment cabinets and used exclusively for the benefit of the passengers. In a further effort to reduce weight, air ducts are made of light textiles rather than the metal previously used, while a new type of cork-aluminum floor weighs 30 percent less than before, acts as a noise dampener, and also provides better heat insulation.

The Passenger Information System (PIS) provides both visual and audio information inside and outside the train. It comprises, among other elements, the destination indicators at the end and side faces of the cars as well as the internal loudspeakers. Six displays are also installed in each passenger compartment for passenger information.

Each train comprises six cars made of aluminium in a Mc-T1-M-M-T1-Mc configuration (Mc – end motor car, T1 – intermediate trailer car, M – intermediate motor car). Each car of the train is carried by two 2-axle bogies. Two-thirds of the axles of the train are electrically driven. The traction system in each motor car consists of 4 self-ventilated asynchronous motors. The 750 V DC line-voltage is supplied via current collectors from the third rail.