Posted: 7 October 2013 | Transport for Greater Manchester | No comments yet

Powers to install a second Metrolink route through the heart of Manchester city centre have been approved by the Government. 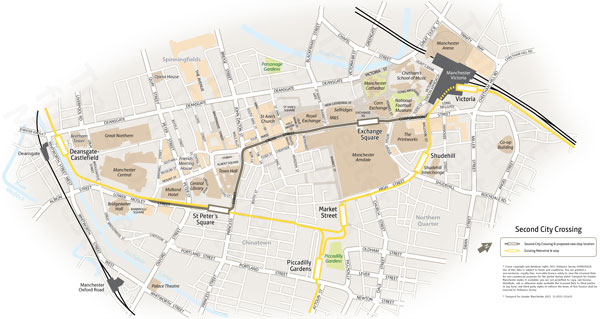 The route – through St Peter’s Square, along Princess Street, Cross Street and Corporation Street and re-joining the existing Metrolink line just outside Victoria station – was the subject of a major consultation in 2011 and a public inquiry earlier this year.

The Secretary of State for Transport, the Rt Hon Patrick McLoughlin MP, has now approved Transport for Greater Manchester’s (TfGM) application for the Transport and Works Act Order required to build and operate the new line.

The decision means TfGM can now finalise arrangements for delivering the scheme, which will see a new, larger tram stop in St Peter’s Square and a new stop in Exchange Square, one of the city’s main retail and leisure areas.

Councillor Andrew Fender, Chair of the Transport for Greater Manchester Committee, said: “This is fantastic news and means we can now press ahead with developing the detail of the delivery programme, appointing a contractor and getting work started as soon as possible.

“By providing the necessary capacity, flexibility and reliability for the future tram network to operate, the second city crossing will play a vital role in helping to build a strong and prosperous economy for Greater Manchester.

“It’s an essential part of the expansion programme which also complements the city’s redevelopment of St Peter’s Square – so this really is excellent news.”

TfGM’s dedicated engagement team, who have been engaging with stakeholders along the route for some time, will share further details on the delivery of the scheme direct to businesses and individuals as they emerge.

The team can be contacted by calling 0161 244 1555 (during office hours) or emailing [email protected]fgm.com.