Trapeze is awarded large order from Frankfurt am Main 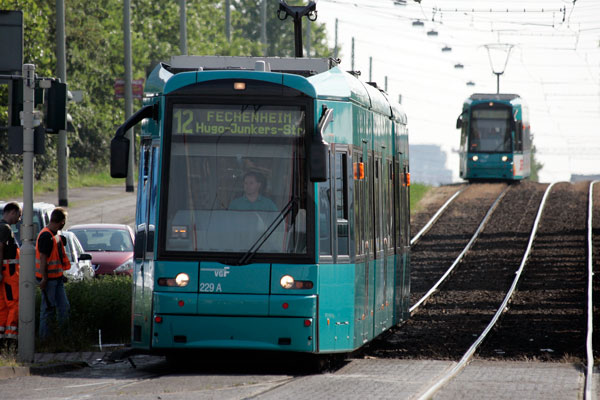 The Trapeze Group has been awarded a contract from the Frankfurt Public Transport Authority (Verkehrsgesellschaft Frankfurt am Main mbH, VGF) for the supply and installation of a cutting-edge integrated Intermodal Transport Control System (ITCS) for bus, train and urban railway services.

The Trapeze Group has been awarded a contract from the Frankfurt Public Transport Authority (Verkehrsgesellschaft Frankfurt am Main mbH, VGF) for the supply and installation of a cutting-edge integrated Intermodal Transport Control System (ITCS) for bus, train and urban railway services. The demanding large-scale order strengthens Trapeze’s position in its German-speaking home market as well as throughout Europe.

Frankfurt is growing – and thus also the public passenger transport requirements of its inhabitants. As the passenger transport authority for the entire Frankfurt region, VGF is giving this fact due consideration by updating its existing components and systems and expanding its network of services in and around Frankfurt. VGF operates more than 500 vehicles to move over 160 million passengers annually. With 250 urban railways and 103 tramways – additional vehicles are purchased and equipped in the coming year and so enlarge the fleet constantly – and 172 buses, VGF makes sure that passengers reach their destinations quickly, safely, on time and in an environmentally friendly way.

VGF has been an important Trapeze customer for years. It chose to further partner with Trapeze due to Trapeze’s technologically superior solution. In the next two years, Trapeze plans to supply and install state-of-the-art hardware and software for VGF’s intermodal transport system as well as mobile technologies. Upon completion of the challenging renewal of the operations control system with ongoing services, VGF stands to benefit from numerous technical as well as commercial advantages.

The newest-generation Trapeze operations control system allows the efficiency of operations control to be further enhanced for the entire vehicle fleet. The new control centre, equipped with an advanced server infrastructure, comprises 40 workstations and information points for the dispatchers. The existing on-board systems inside the vehicles are to be updated or upgraded. This includes cutting-edge on-board computers covering the whole range of requirements of an ITCS. These important communication platforms control a wide range of peripherals through numerous interfaces, for example the passenger information displays inside the vehicles. They allow accurate location of the vehicles as well as direct voice and data communications with the control centre.

For the important data and voice communications between the vehicles and the control centre, the company is relying on a new analogue communications network. For this single-frequency system, the public transport authority plans to install eight above-ground and 23 underground base stations. The latter are to mainly cover the tunnel sections of the underground railway and of the tramway.

The new radio communications system is also anticipated to improve communications between the control centre and the stop displays. Among other things, it allows dispatchers to check that the passenger information provided has been correctly activated at each stop, enabling passengers to profit from correct real-time information.

The project launch is scheduled for mid of September 2013, and the entire execution time is estimated at about three years. “With the roll-out of the new Trapeze system, the public passenger transport authority of Frankfurt am Main can take advantage of additional possibilities in the field of fleet management. We now have efficient and reliable communication paths with an improved passenger information for the benefit of our passengers. We are looking forward to continuing our smooth collaboration with the competent employees of Trapeze,” says Dipl.-Ing. Michael Budig, Technical Director and Managing Managing Director of VGF.