On Saturday August 31, 2013, will be inaugurated the first line of the Tours tramway network at the Tours train station… 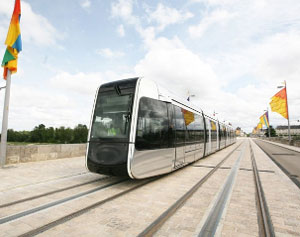 Alstom supplied 21 Citadis trams that are 43 meters long to the Greater Tours area, with a capacity of up to 280 passengers. The trams run on the network’s first tramway line, which is 15 km long and serves 29 stations. Alstom has also fitted 1.8 km of tracks with its APS system using a third rail and ground-level power supply, between the Tours train station and Place Choiseul to preserve the historic heritage of the city centre.

The Tours tramway was designed by the “Ensemble(s) la ligne” collective under the direction of the RCP agency1 and adapted to the Citadis by Alstom Design & Styling department. With its interior fittings, the Tours Citadis has achieved an unmatched level of passenger comfort using sensorial design technology. The on-board lighting depends on the exterior luminosity: it is softer in summer and warmer in winter.

The exterior colors of the tram, “mirroring the waters of the Loire” a tribute to the river that crosses the town, reflect the city of Tours and the weather’s color. The design of the tram’s front section is natural and discreet. It has two luminous LED strips that light the tracks and give the impression that the tram is moving like a cursor and raising the track in front of it.

Alstom’s Citadis tram offers a quality on board experience and optimal comfort thanks to an integral low floor, air-conditioning, video-surveillance systems and information conveyed via announcements and screens. Alstom’s APS solution, tested for the last ten years2, preserves the urban setting and the historic heritage of the cities that have opted for it.

Eight French Alstom Transport sites were involved in this project: La Rochelle for the design, Reichshoffen for the assembly, Ornans for the engines, Le Creusot for the bogies, Tarbes for traction system components, Villeurbanne for on-board electronics, Saint-Ouen for interior design and Vitrolles for the APS. The project has generated more than 2,000 jobs in France at Alstom and its suppliers.

Alstom has already sold nearly 1,700 Citadis to 42 cities in the world. The trams have already carried more than 5 billion passengers and demonstrated their reliability operating across more than 450 million kilometers.

2 – 12 million kilometres covered in the cities of Bordeaux, Orléans, Angers and Reims.