11 local authorities have been awarded grants from the Clean Bus Technology Fund, which will allow almost 400 buses to be upgraded… 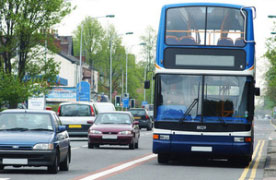 Eleven local authorities have been awarded grants from the Clean Bus Technology Fund, which will allow almost 400 buses to be upgraded.

Towns and cities in England are set to benefit from £5 million of funding to reduce pollution from local buses, Local Transport Minister Norman Baker has announced today (29 August 2013).

A total of 11 local authorities have been awarded grants from the Department for Transport’s Clean Bus Technology Fund, which will allow almost 400 buses to be upgraded.

“The funding we are providing will help clean up emissions from older buses in some of our most polluted urban areas, with all the health benefits that brings.

“This will lead to real improvements in air quality on some of our most polluted streets, as well as helping to stimulate jobs and growth in the bus and environmental technology industries. I look forward to seeing how these initiatives are taken forward, and to the delivery of real results very soon. I hope that other parts of the country will adopt similar measures in the near future.

“Improving air quality is important for the coalition government, as is economic growth. This scheme will benefit the environment as well as helping create and sustain jobs in British companies, allowing them to develop and market new clean technologies here and abroad.”

“This funding boost will bring real improvements to air quality around the country which is good news for the environment and our health.

“I am keen to embrace new technology and encourage local authorities to share their experience so that others can follow suit.”

DfT has already provided £5 million of funding, match-funded by the Mayor, to fit 900 London buses with exhaust after-treatment technology, which is already delivering significant reductions in pollution in the capital. The funding announced today (28 August 2013) will allow local authorities in other parts of England to clean up their buses in similar ways, delivering similar benefits.

By Department for Transport (DfT)