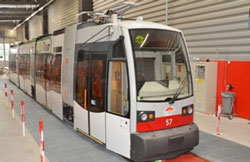 A Siemens ULF (Ultra Low Floor) low energy tram is now being tested in passenger service on Vienna public transport operator Wiener Linien’s route 62 between Kärntner Ring/Opera House and Lainz. The unit being tested on Wiener Linien boasts features that include three new air-conditioning units with heat pumps, a variable-frequency compressor and C02 sensors; as such its “EcoTram” moniker is well deserved, since more efficient cooling and heating of the passenger compartment will reduce the tram’s overall energy consumption. The test operation will run until May 2014.

“Heating, air conditioning and ventilation can make up 30 to 40 per cent of total energy consumption,” explains Sandra Gott-Karlbauer, CEO of the Urban Transport Business Unit at Siemens. “The EcoTram project will show how far this figure can be reduced. Experts calculate potential annual savings of up to 3000 MWh for Wiener Linien, which equates to the electricity consumption of a small town and would reduce CO2 emissions by 600,000 kg over the course of a year.”

The tram is fitted with intelligent control units that predict whether cooling or heating will be required imminently. On a summer day, for example, if the vehicle enters a tunnel where the ambient air is cooler, the system proactively turns down the cooling. The same applies to return legs when there are no passengers on board. The very latest air-conditioning systems are being used during the test in order to determine the optimal hardware and software configurations.

In the first project phase, the EcoTram was tested in a climatic wind tunnel and in regular passenger service before it was reconfigured and the same measurements were taken once again. The factors tested include the inlet air temperatures for the air-conditioning systems, the air current flows inside the vehicle, and the effects of heat and moisture generated by passengers.

The research project has been running since 2009 and is supported by the Climate and Energy Fund of the Austrian Research Promotion Agency (FFG) as part of its “New Energies 2020” program. Siemens has constructed the complete vehicle, while the Automation and Control Institute at the Vienna University of Technology (TU Wien) has developed the control software, Rail Tec Arsenal has manufactured the measuring technology and Vossloh Kiepe has supplied the heating and air-conditioning units. Schieneninfrastrukturgesellschaft (SCHIG) is managing the project.