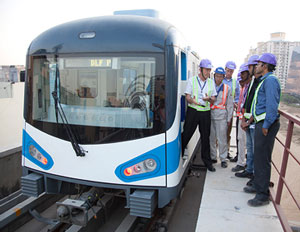 Having built the metro line in the Gurgaon Cyber City business district with a connection to the Delhi Metro, Siemens is now constructing an approximately seven-kilometer extension to the south as a turnkey rail system. A corresponding order with a volume worth about 70 million euros has been placed with Siemens by the local concessionary IL&FS Rail Limited (Infrastructure Leasing and Financial Services). The scope of delivery includes the rolling stock, the entire electrification and the signaling system. In addition, Siemens is responsible for the complete system integration. The line extension is due to be commissioned as early as the end of 2015.

For the new section of the Gurgaon line, Siemens is delivering seven aluminum-bodied metro trains. The trains are to run on standard-gauge track at a top speed of about 80 km/h. The modern signaling and train control system will make sure that the required service interval of 120 seconds is achieved during rush-hour traffic. This short headway will enable the metro trains to transport more than 30,000 passengers per hour.

Safe and reliable operation will be achieved by using the Sicas ECC type electronic interlocking, the LZB 700 M automatic train control system with ATP (Automatic Train Protection) and ATO (Automatic Train Operations), as well as the Vicos OC 501 ATS (Automatic Train Supervision) system. To fully electrify the new line extension, Siemens will install a 750 V DC traction power supply along with a third-rail system for current collection. Power will be supplied to the extension and the rest of existing line from the 66 kV grid. A medium-voltage ring will supply four substations, six metro stations and the depot with 11 kV AC.

Megacities like Delhi are marked by rapidly rising populations. New districts are emerging and growing into autonomous cities – such as Gurgaon, which already has a population of more than 500,000. In order to connect this area to the center of Delhi, Siemens was given the order in 2010 to build a metro line linking the residential and business district of Gurgaon with the capital’s metro system. Passenger service on the line is to commence at the end of May 2013, thereby substantially boosting the transport capacity of the urban rapid transit system.

The section now contracted to Siemens is to run further to the south and will extend the existing metro line by around seven kilometers and six stations. As of the end of 2015, twelve automatic Siemens trains will be operating on the completed 13-kilometer-long line and serving twelve stations.

Siemens succeeded in entering the Indian mass transit sector in 2004, when the company completely equipped Line 3 of the Delhi Metro with signaling and rail communication systems. All extensions of Line 3 to an overall length of 60 track kilometers were also equipped with control and signaling systems by Siemens. These were followed up in October 2008 by the order to supply the signaling, electrification and baggage logistics for the 23-kilometer-long Delhi Airport Rail Link. For the first time in India the Siemens scope of supply and services for the new metro link to Gurgaon Cyber City included not only subsystems, but also responsibility for the key components and their integration as well as interfacing for the construction of a turnkey system.