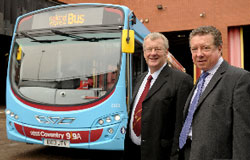 Passengers in Coventry are to benefit from a fleet of 33 brand new buses being rolled out as part of a ground breaking deal between National Express Coventry and transport authority Centro.

The new £6.4 million fleet of 23 eco friendly Volvo single decks and 10 ADL double decks are part of the wider £80 million Partnership Plus deal signed in June by the two organisations which is set to bring a raft of improvements for the region’s bus passengers over the next two years.

The new single deck buses are being deployed on the 9/9A Green Lane/Finham service, on the route between the city (Pool Meadow) and University Hospital at Walsgrave and on the service 20 and 20A routes between the city and Bedworth and Bell Green.

The double decks are going into service on the 8/8A route between the city and University Hospital at Walsgrave.

Centro chairman Cllr John McNicholas said: “I am delighted that National Express Coventry has made such an investment in its bus fleet in the city.

“These new vehicles, along with commitments in Partnership Plus, will continue to improve the bus network and the travel experience for the passenger.”

Peter Power, managing director of National Express Coventry, said: “These new vehicles are equipped with the latest technology including greener low emission engines and state of the art CCTV.

“The new vehicles are a big investment into Coventry’s bus network and we hope that our customers will be as proud of them as we are.”

The Partnership Plus deal will see £65 million of investment in the bus network by National Express and £16 million by Centro.

Coventry city centre will get new infrastructure, shelters and passenger information as part of the deal.

Across the region, the partnership will deliver: