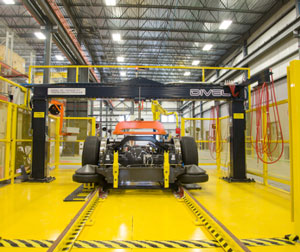 Alstom today inaugurated its new 55,000-square-foot bogie manufacturing plant located in the cutting-edge industrial complex in Sorel-Tracy, Quebec. Built to serve Alstom’s needs in the context of a $1.2 billion CA ($864 million €) contract between the Bombardier-Alstom consortium and the Société de transport de Montréal (STM) to supply the STM with 468 new metro cars, the plant will assemble more than 900 bogies.

The bogie, which has been designed to meet the STM’s requirements, is a unit that supports the metro car and includes the drive, braking and suspension mechanisms that ensure passengers’ comfort and safety. Alstom anticipates that the first bogie manufactured in Sorel-Tracy will be completed in the fall of 2013.

“This transfer once again demonstrates Alstom Transport’s ability to localize manufacturing operations to be closer to its customers and users,” said Guillaume Mehlman, president of Alstom Transport in North America. “Beyond this first contract with the STM, the Alstom plant in Sorel-Tracy, with its state-of-the-art equipment, will be able to meet the most complex needs of North American public transit corporations,” he added.

“By locating the manufacturing and assembly operations for the bogies in Quebec, Alstom is proud to contribute to the STM’s requirement for 60% Canadian content,” said Claude Lambert, vice-president and general manager of Alstom in Sorel-Tracy.

The transfer of technology is part of Alstom’s strategy to address local market needs. Therefore, the transfer of technology and expertise for bogies and shock absorbers from the Alstom centre of excellence, Le Creusot, in France, to Sorel-Tracy plant, will enable Alstom to better address the North American market. The motors that will be integrated into the bogies of Montreal’s metro cars will come from the Alstom manufacturing centre in Hornell, in New York State. The bogies assembled in Sorel-Tracy will then be shipped to the Bombardier plant in La Pocatière, where the cars will be mounted on them.

In addition to the bogies, Alstom, through its various sites including the one in Montreal, will be supplying traction, train control, communications and passenger information, and video-surveillance systems for the new metro cars. Over the eight-year span of the contract, more than 300 Alstom employees in Quebec will take part in designing, manufacturing and commissioning the new cars, which will be delivered to the STM.

Montreal’s metro comprises four lines with a total of 71 km of track and 68 stations. Each metro car travels about 78 million kilometres per year.