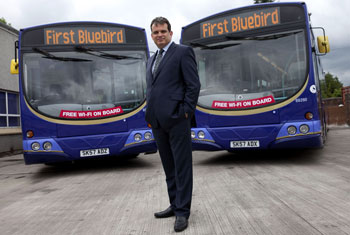 Local bus operator, First Scotland East, today revealed it is making significant improvements to its Service X38 fleet which are designed to improve the quality of journeys for passengers travelling between Stirling, Falkirk, Linlithgow, Edinburgh and locations in between.

In a move that recognises the route’s historic links, First has re-named the service, FirstBluebird. Many customers will remember that it was Bluebird buses that jointly operated Service 38 with Eastern Scottish in years gone by. First is repainting Service X38 buses a distinctive blue reflecting the old Bluebird colours of previous years. Nine buses have already been transformed.

In addition, every bus that operates on the route has been fitted with complementary wi-fi so that customers can enjoy free use of their tablet or mobile device whilst on board.

Managing Director of First Scotland East, Paul Thomas, unveiled two of the improved vehicles at the company’s headquarters in Larbert. He said: “The improvements we’ve introduced to Service 38 reflects our aim to improve services for our customers and our commitment to encourage more people to use our services and to use them more often.”

“In changing the name of the buses to Bluebird we are celebrating our historic routes and it’s a move that has been widely welcomed by our staff, many of our customers and other stakeholders.”

He continued: “Some of the refreshed buses have been in service for a week or two and are already proving popular,” continued Mr Thomas. “Feedback from passengers indicates that in particular the complementary wi-fi, which allows passengers to stay connected whilst on the move, is very popular.”